On the export side, Chery’s export sales in February reached 19,997 vehicles, up 9.3% year-on-year, and its cumulative export was 46,897 vehicles, up 33.9%, maintaining the vigorous trend of “a good start in the Year of the Tiger”.

In Brazil, according to the data released by Fenabrave (Federao Nacional dos Distribuidores de Veículos Automotores), Chery continued to rank among the top nine in passenger car sales with a sales volume of 3,241 vehicles in February, and Chery’s cumulative sales volume from January to February reached 6,372 vehicles, accounting for 3.36% in the passenger car market. In the car segment, Chery’s hot-selling model Arrizo 6 Pro ranked fourth with a market share of 5.35%. On February 17th, Brazil launched Tiggo 5X Pro, a brand-new Pro Family blockbuster product, and invited well-known KOL to come to the scene for the celebration.

In Chile, according to the data released by ANAC (Aso 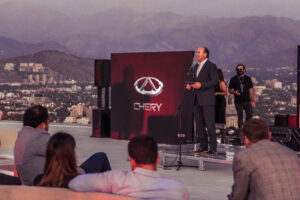 ciación Nacional Automotriz de Chile A.G.), Chery’s sales in February increased by 63% year-on-year, and its market share of 7.7%, surpassing Toyota, Hyundai and other brands, ranked second among all automobile brands, with the cumulative sales volume up 114% year-on-year. In the SUV market segment, Tiggo 2 Series continued to rank first in sales volume. At the beginning of January this year, Chery held a media conference on the launch of Tiggo 8 Pro 1.6 T model on the top floor of Titanium La Portada Hugo Building in Chile. The media guests at the scene appraised the new model while tasting special cocktails and exchanging their views and opinions.

In the Russian market, which has been deeply cultivated for 17 years, Chery has always been a “national car” in the eyes of local people. According to the data released by AEB (Association of European Businesses), Chery’s cumulative sales in February increased by 46% year-on-year. On March 1st, Chery launched a brand-new Tiggo 8 model in Russia, which attracted much attention once released.

Today, Chery has 10 million users worldwide, including 2 million users outside China. Up to now, Chery has established 6 R&D bases, 10 overseas factories and more than 1500 overseas distributors and service outlets, with a total overseas production capacity of 200,000 units/year, ranking first in the export of Chinese brand passenger cars for 19 consecutive years. In February, OMODA 5, a “global car” developed by Chery with “user thinking + Internet thinking”, officially rolled off the production line in Wuhu factory, and would be launched in overseas markets as scheduled in the first half of this year. Chery will strive to achieve the annual export volume of 400,000 vehicles and further accelerate the globalization strategy. 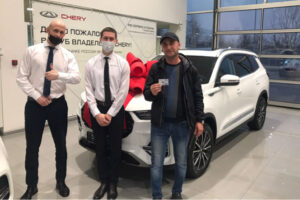 Chery has been known as “Technological Chery” since its foundation for insisting on mastering core technologies. It has set up five Research and Development centers in the world and a Research and Development team of over 5,000 elite members, providing it with advantages in traditional fuel technology, new energy, intelligence manufacturing and other fields. After more than 20 years of exploration in the field of new energy vehicles, Chery has established its leadership with four vehicle assembly platforms, five general subsystems and seven core technologies. Its EQ1 model has become the leader of mini battery electric vehicles in China. In the field of intelligent manufacturing, Chery has released the “CHERY LION” strategy, gradually realizing the intelligent layout in the whole life cycle of R&D, manufacturing, marketing, and service, as well as achieving the mass production and launch of L2.5 autonomous driving technology. As for global market expansion, Chery is the first Chinese automobile company to export vehicles, CKD parts, engines, and vehicle manufacturing technology and equipment around the world. Up to now, Chery has exported its vehicles to more than 80 countries and regions and has set up 10 overseas factories and more than 1500 overseas dealers and service outlets. With nearly 10 million users worldwide, including 2 million users outside China, Chery has ranked first in the number of passenger cars exported from China for 19 consecutive years.