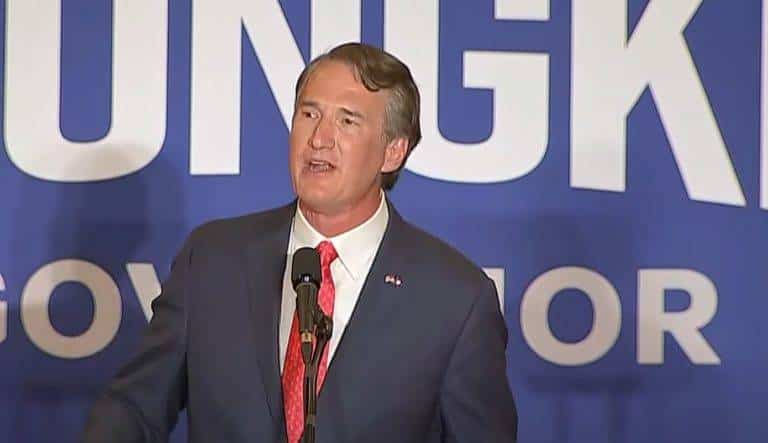 Congratulations are in order for Governor Glenn Youngkin in Virginia.

Biden won by 10 points in Virginia in the presidential election in November 2020.

So did Ethiopian American, Eritrean America and Somali American voters in Virginia who voted to dumped McAuliffe.

They all felt betrayed by the Democ RAT party.

I felt betrayed by Biden five days after his inauguration when it became clear to me that his administration was rooting for the terrorist Tigray People’s Liberation Front (TPLF).

The chase for governor of Virginia ended on November 2.

It was hello Youngkin time.

It was bye-bye Terry baby time!

Rock a-bye, baby,/ On the treetop,
When the wind blows,/ The cradle will rock.
When the bow breaks,/ The baby will fall,
Down will come baby,/Cradle and all!

Down came Terry McAuliffe and the Democ RAT cradle in Virginia. Terry McAuliffe listening to Boss Biden onstage at an Arlington, VA rally on 10/26/21 I wrote a blog for Youngkin featuring his video appeal for support from Ethiopian American voters.

I mobilized Ethiopian American, Eritrean American and Somali American voters to come out and vote for Youngkin on social media.

I made dozens of calls to friends, acquaintances, activists and professionals in Virginia not only to vote but also talk to their friends and neighbors to vote for Youngkin.

Why did I do all that at great expense in time and energy?

I wanted to do everything I can to deliver on my promise of driving the Democ RATs outta office ASAP!

A scientist once asked, “Does the flap of a butterfly’s wings in Brazil set off a tornado in Texas?”

I don’t know but I do know small things can have non-linear impacts on complex processes. The work of an individual or small group could have an outsize effect.

I believe Ethiopian American, Eritrean American and Somali American voters in Virginia made a difference in electing  Glenn Youngkin.

Yes, I have an axe to grind with Democ RATs!

The Biden administration and the Democratic Party in Congress have put Ethiopia in the crosshairs.

On May 19, 2021, the United States Senate pulled the trigger on Ethiopia by passing S. Res. 97 demanding the Ethiopian Government comply with a laundry list of activities that are insulting of Ethiopian sovereignty and denigrate the dignity of Ethiopia as a nation. It even commands the Ethiopian Government “to ensure that any apprehensions of TPLF members are carried out with the least possible use of force.”

On May 23. 2021, the U.S. State Department pulled the trigger on Ethiopia by announcing “visa restrictions” to persons suspected of “undermining resolution of the crisis in Tigray.

On August 25, 2021, United States Trade Representative Katherine Tai pulled the trigger by announcing that because of the conflict in Tigray Ethiopia more than likely will be kicked out of  the African Growth and Opportunity Act (AGOA) benefit system.

On September 17, 2021, President Joe Biden pulled the trigger on Ethiopia by issuing an Executive Order “Imposing Sanctions on Certain Persons With Respect to the Humanitarian and Human Rights Crisis in Ethiopia.”

On October 21, 2021, the House Foreign Affairs Committee pulled the trigger on Ethiopia by passing H. Res 445 condemning the Ethiopian Government and demanding that it negotiate with the terrorist group Tigray People’s Liberation Front (TPLF).

That Resolution condemns Ethiopia for “refusing multiple attempts by the international community including the African Union, Kenya, Sudan, the European Union, and the United States to help broker a negotiated ceasefire and peaceful settlement that includes the TPLF.” It has the audacity to command Ethiopia to negotiate with the TPLF terrorist group.

U.S. Secretary of State Antony Blinken pulled the trigger by coordinating with the European Union to apply pressure and sanctions to bring Ethiopia to its knees and negotiate with the TPLF under the guise of “cessation of hostilities.”

The Biden administration continues to pull the trigger on Ethiopia by coordinating with prominent media outlets including CNN, New York Times, Bloomberg and others to bombard global public opinion by perpetuating a narrative of condemnation, disinformation, demonization and degradation of Ethiopia.

America headed the wrong way with Biden in the driver seat

What happened to the George Floyd Justice in Policing Act of 2021?

Is an immigration reform bill in Congress?

What happened to the Infrastructure Investment and Jobs Act?

Not a doggone thing!

But Democ RATs can pass resolutions condemning Ethiopia faster than a speeding bullet.

There is no question America is heading the wrong way at home and abroad under the Biden administration.

Americans want their problems at home solved, not somebody else’s problems solved half way around the world by their government.

Biden allowed America to be humiliated by a bunch of terrorist thugs in Afghanistan.

Biden has made a mockery of America’s global fight against terrorism by creating two types of bloodthirsty terrorists. OUR TPLF, U.S., terrorists and all others.

Biden has made America the laughingstock of the world.

Biden sold down the river a bilateral relationship between Ethiopia and the U.S. which began in 1903, the first with an African country, by siding with the TPLF terrorists.

Biden turned his back on Ethiopia and pledged his full support to the TPLF terrorist group in Ethiopia!

Reading the tea leaves, it seems clear the Democ RAT cradle in Congress and the state legislatures will continue to fall, and hard.

In terms of mere numbers, of the 34 Senate seats up for election in 2022, Republicans are defending 20 and Democrats. But only eight seats are considered “battlegrounds”.

Several Senate seats held by Democrats are likely to flip and those are in states where there are enough Ethiopian American voters who could change the outcome of the elections.

Republican Pennsylvania Senator Pat Toomey is retiring. Democrats’ pipedream they can flip  Pennsylvania from red to blue because it is an open seat.

However, there are enough Ethiopian American, Eritrean American and Somali American and other and others similarly situated voters from Africa to turn the Democrat’s pipedream into a Democratic nightmare in Pennsylvania.

There is a large and quite prosperous Ethiopian American community in Georgia, especially in the greater Atlanta metro area.

There is absolutely no question Ethiopian American voters can make Raphael Warnock history.

Nevada Democratic Senator Catherine Cortez Masto won her seat in 2017 by 47.1 percent. There is a huge Ethiopian American population in the Las Vegas/Clark County area. With effective mobilization of Ethiopian American voters, Masto can join Warnock on the trash heap of history.

In Arizona, Democratic Senator Krysten Sinema who opposed Biden’s $3.5 trillion social welfare package has higher approval rating than Mark Kelly who won his seat in 2020 in a special election. Ethiopian American voters could work to transition Kelly from the U.S. Senate to the trash heap of history in 2022.

Similar situations may be expected in Colorado.

In the 1870s, an American cartoonist named Thomas Nast first used a donkey to represent the Democratic party in a cartoon captioned, “A Live Jack-Ass Kicking a Lion”.

In 2021, life imitates art as the Jackass Party tries to kick a live Ethiopian lion!

In November 2022, the Jackass Party will get a thumping it will not forget for a long time.

We have a plan. Keeps your eyes peeled. Stay tuned.