James Otis, an early instigator of the American revolution, captured the rebellious sentiments and resentments of the colonists when he proclaimed, “Taxation without representation is tyranny.”
In 1765, Otis organized an intercolonial conference to protest taxes on stamps affixed to legal and other documents in the colonies. That convention issued a Resolutiondeclaring: “That it is inseparably essential to the freedom of a people, and the undoubted right of Englishmen, that no taxes be imposed on them, but with their own consent, given personally, or by their representatives.” Britain initially ignored the boycotts of British imports and other financial pressure from the colonists but repealed the Stamp Act in March 1776. By July that year, the colonists had declared independence and were well on their way to overthrow the tyranny of British colonial rule.
Today, the Thugtatorship of the Tigrean People’s Liberation Front (T-TPLF), which controls 100 percent of the “Ethiopian parliament” and rules by a draconian state of emergency decree, is imposing outrageous and onerous taxes on the people of Ethiopia.
That is not only taxation without representation; it taxation with repression!
Over the past year, the people of Ethiopia have engaged in massive acts of civil resistance to the minority black apartheid T-TPLF rule.
In response, the apartheid T-TPLF regime imposed a “state of emergency” decree giving itself the arbitrary power to engage in extrajudicial killings, mass and indiscriminate detentions, warrantless searches and seizures and total suppression of mass media including the internet.
The apartheid T-TPLF regime runs a police state in Ethiopia and is now demanding outrageous taxes from the people of Ethiopia to finance that police state. Talk about adding insult to injury!
But the T-TPLF’s guns and tanks have not been able to suppress the quiet riot that is raging throughout Ethiopia every day.
The quite riot began nearly two years ago. The T-TPLF tried to suppress it with a state of emergency decree.
Two weeks ago, the quiet riot exploded in massive acts of civil when the T-TPLF unleashed its swarm of corrupt and predatory tax collectors to prey on the population in every hamlet, town and city. 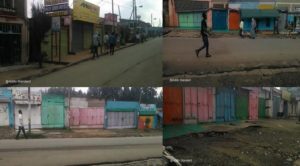 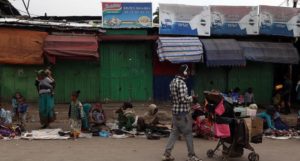 You see these dictators on their pedestals, surrounded by the bayonets of their soldiers and the truncheons of their police … yet in their hearts there is unspoken fear. They are afraid of words and thoughts: words spoken abroad, thoughts stirring at home — all the more powerful because forbidden — terrify them. A little mouse of thought appears in the room, and even the mightiest potentates are thrown into panic.

3) Massive nonviolent resistance can defeat the mightiest and most brutal oppressor.  The T-TPLF knows its day of reckoning has arrived. “Those who change peaceful change impossible will make violent revolution impossible.”
Excerpt from my May 2006 commentary on civil disobedience
Below I present excerpts from my May 2006 commentary discussing civil disobedience is a powerful tool to resist and defeat oppressors and tyrants.
Nonviolence is the answer to the crucial political and moral question of our time — the need for man to overcome oppression and violence without resorting to violence and oppression,” declared Martin Luther King (MLK) in his Nobel acceptance speech in 1964.  MLK was certainly not the first African American to advocate a nonviolent struggle (in contrast to civil disobedience of unjust laws) against inequality and injustice in America.
MLK’s imagination for a nonviolent struggle against segregation and racism was fired by Thoreau’s Essay on Civil Disobedience. MLK was fascinated by the whole idea of actively refusing to cooperate with a system that inflicted so much suffering on black people; but at the time the idea of civil disobedience as an effective tool for social change seemed impractical to him.
By the time of the Montgomery Bus Boycott in 1956, MLK had made an irreversible intellectual commitment to nonviolent resistance as a tactical weapon against segregation and racial discrimination. He observed that “living through the actual experience of the protest, nonviolence became more than a method to which I gave intellectual assent; it became a commitment to a way of life. Many issues I had not cleared up intellectually concerning nonviolence were now solved in the sphere of practical action.”
MLK’s ideas about nonviolent civil disobedience rested fundamentally on his analysis of the nature of human laws, in contrast to the laws of God. In his Letter from Birmingham Jail, he explained that there were just and unjust laws in society: “A just law is a man-made code that squares with the moral law or the law of God. An unjust law is a code that is out of harmony with the moral law. Any law that uplifts human personality is just. Any law that degrades human personality is unjust.”
Disobedience of unjust laws, according to MLK, is a hallmark of Christians who early in their history “were willing to face hungry lions and the excruciating pain of chopping blocks rather than submit to certain unjust laws of the Roman Empire.” He even found civil disobedience practiced widely among the American colonists who staged the Boston Tea Party (colonial settler boycott of English tea after Parliament gave an English company monopoly on tea importation into the colonies) just three years before the onset of the American revolution.
By the mid-1950s, MLK had concluded that it took too long to end unjust laws through judicial pronouncements and injunctions, which were routinely ignored and flouted by segregationists. He insisted on the moral imperative and duty of citizens to disobey unjust laws and by the time of the Montgomery Boycott in 1956, MLK had come to the conclusion that change in segregation laws could come only through organized mass action, and not negotiation in the boardroom or litigation in the courtroom.
MLK faced a number of organizational and tactical problems in managing a mass-based civil rights movement: mobilizing that part of the black community that had been “drained of self-respect” into joining a mass civil rights movement, mitigating the violent tendencies of black youth and that part of the black community that has “absolutely repudiated” Christianity, particularly black nationalists and separatists, managing the cross pressures applied on him by sympathetic white liberals who wanted him to be more patient in seeking changes, and fending off the personal attacks of FBI’s J. Edgar Hoover.
Throughout the 1960s, MLK applied Gandhi’s strategy in launching successful nonviolent civil disobedience campaigns based on the existence of four preconditions: existence of sufficient facts showing substantial injustice, attempts at genuine negotiations to remedy the injustice, self-purification, and ultimately, direct action. From his jail cell in Birmingham, Alabama in 1963, MLK explained how he applied his four-point direct action program in the civil disobedience campaign in that city.
MLK was criticized as an extremist for his nonviolent disobedience and advocacy, but he often turned the question on his critics: “So the question is not whether we will be extremists, but what kind of extremists we will be. Are we to be extremists for hate or for love? Will we be extremist for the preservation of injustice or for the extension of justice? Jesus Christ, was an extremist for love, truth and goodness.” He explained that the central purpose of direct action was to produce negotiations with those that have historically refused to discuss the issue. “Nonviolent direct action seeks to create such a crisis and establish such creative tension that a community that has constantly refused to negotiate is forced to confront the issue. It seeks so to dramatize the issue that it can no longer be ignored.”
Above of all, MLK was a man of vision and dreams, and saw America as the Promised Land. Were he alive today, he would no doubt have urged Ethiopians to set aside their ethnic, religious, linguistic, regional and gender differences and “sit down together at the table of brotherhood (and sisterhood) and work together, pray together, struggle together, go to jail together, and stand up for freedom together, knowing that they will be free one day.”
I have a dream that one day, very soon, Ethiopians of all ethnic groups faiths, languages and regions will sit down together at the table of brotherhood and sisterhood and work together, pray together, struggle together, go to jail together, and stand up for freedom together, knowing that they will be free one day.”
“Strength does not come from physical capacity. It comes from an indomitable will.” – Mahatma Gandhi
Civil disobedience works!
As the great American revolutionary Thomas Paine instructed:

Power concedes nothing without demand. It never did and it never will. Find out just what people will submit to, and you have found out the exact amount of injustice and wrong which will be imposed upon them; and these will continue until they are resisted with either words or blows or both. The limits of tyrants are prescribed by the endurance of those whom they oppress.

For power dissolves when people lose their fear. You can still kill people who no longer fear you, but you cannot control them. You cannot control dead people. Walk through a cemetery with a bullhorn, if you like. Command people to rise up, clean the streets, pay taxes, report for military duty, and they will ignore you. Political power requires obedience, which is fueled by the fear of pain to be inflicted if you refuse to comply with the will of those who control the instruments of violence. That power evaporates when the people lose their fear…

Civil disobedience has a very simple definition: The people have lost their fear of their oppressors. That is all it means!
“If a law is unjust, a man is not only right to disobey it, he is obligated to do so.” — Thomas Jefferson.
Power (of civil disobedience) to the people of Ethiopia.
To be continued…