Ethiopian Shipping and Logistics Service Enterprise’s (ESLSE) brand new trucks arrive at Djibouti with their entry to Ethiopia with the first batch of fertilizer cargos being expected to start as early as this coming week.
It is to be recalled that the sea and land logistics giant procured 38 trucks directly as per the country procurement rule from the former supplier, Jinan Sinotruck Co, which won the bid for the procurement of 150 Sino trucks about a year and half ago.
The country’s law allowed the enterprise to procure up to 25 percent additional product or service directly besides the original biding volume or amount.
As a result, the Chinese prominent truck manufacturer agreed to supply additional 38 trucks on the same winning unit price, which was given for the 150 trucks last year.
ESLSE has stated that the latest procurement consumed 194 million birr. The trucks that arrived in Djibouti this week will be assembled at the same there, and will start their operation by transporting fertilizer cargo which was imported for the upcoming agriculture season. 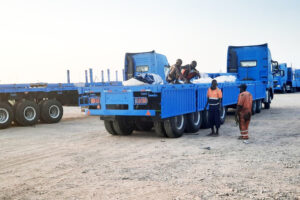 Wondimu Denbu, Deputy CEO for Corporate Service at ESLSE, told Capital on Friday March 18 that the trucks have already been assembled. He said that relevant officers from the transport authority and Customs Commission will travel to Djibouti on Saturday to provide relevant documentation and plate numbers for the trucks.
“We hope that starting from Tuesday, the new trucks shall commence their voyage to Ethiopia with fertilizer cargos,” he expressed his expectation.
Currently, ESLSE has 450 operation heavy-duty trucks and to which the 38 trucks will beef the number to 488.
About five years ago, 215 trucks were purchased from the French automotive company, Renault Trucks. As the norm of ESLSE, the new fleet will allow the enterprise to exclude the long-serving and economically inefficient trucks from its cross-border operation.
Jinan Sinotruck Co, which is known for its heavy-duty trucks, Sinotrucks, was the company that won last budget year’s bid to supply 150 Sinotruck vehicles at the cost of 11 USD million.
ESLSE is also under preparation to procure additional 150 heavy duty trucks through international bid. It is to be recalled that few weeks ago, the multimodal monopoly annulled the first biding due to lower interest of biding companies. The bid document is said to be revised and refloated.
According to Wondimu, the bid has already been refloated and interested bidders have been buying the document, and the bid is expected to be opened in the coming month.
New box
The logistics giant has also concluded the procurement of additional 5,000 containers on international bid from the Chinese company CCCC. According to the Deputy CEO, ESLSE’s owned containers have clocked to more than 13,909 TEUs.
At the beginning of the budget year, ESLSE had announced that it was working to manage the containerized consignment challenges under short and mid term plans. The global phenomenon stemming from the COVID 19 pandemic however created cargo boxes shortage not only for ESLSE but also for the sector in general, globally.