BY DAKSHA DEVNANI AND SIMONE JONKER

Abushe is from Jinka, southern Ethiopia. With his dark skin that accentuates his blue eyes, his look has captured the imagination of the world. The young boy was born with a condition known as Waardenburg syndrome, which is a melanin gene mutation affecting the pigment in the development of eye color. According to the United States National Library of Medicine, this condition is very rare and affects an estimated 1 in 40,000 people.

As such, Abushe was born with the most startling blue eyes.

When Abushe’s parents saw his eyes, they were shocked; they feared he was blind. Being desperately poor, they could not have him diagnosed and treated. Abushe’s parents then came to an understanding that his rare condition was a “gift from God.”

When French photographer Eric Lafforgue met Abushe in early 2016, the boy lived with his grandparents in a small hut made out of hatch and wood. He was able to attend school, and the food was provided by generous patrons of the restaurant opposite the slum. Unfortunately, a fire broke out. He and his grandmother escaped without any major injuries except for a burn on Abushe’s forehead.

The fire destroyed the few possessions the family had, but luckily, Abushe was able to save something extremely precious. A red soccer ball is Abushe’s whole world. His dream is to play soccer one day with famous soccer stars.

The young boy’s favorite team is Barcelona. He is an avid fan and watches games whenever he can. He admires the forward Lionel Messi. Abushe told Lafforgue, “Messi is just like me. He is not like the others!”

Abushe’s life is not easy—he often gets teased and taunted by his peers; they cruelly call him names like “plastic eyes” and “monster.” Sometimes they even hit and punch him.

Abushe does not let that get him down and shows great promise and talent in becoming a soccer player of note. To play for Barcelona is what he wants. He has a passion for the game. He aspires to provide for his family one day.

In October 2016, Mike, a Cape Town-based travel and adventure blogger and photographer, was on a 13-day expedition with Kingsley Holgate and his team of adventurers when he came across Abushe, who jumped on the foot railings of their vehicle and charmed them with a beaming smile and his deep blue eyes.

Describing the moment, Mike wrote on his blog: “He had blue eyes like I’ve never seen before in my life! They were like two tiny planets, with the friendliest face to go with them.” 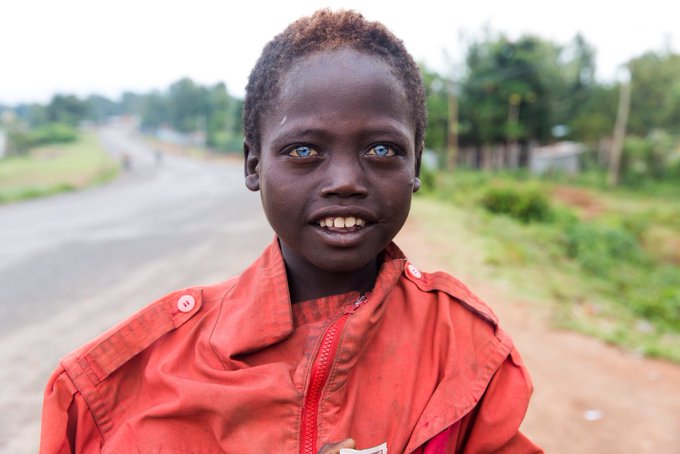 Happy #WorldPhotoDay! Here’s one of my favorite portraits I’ve taken this year to celebrate! “Abushe from Ethiopia”

Mike also had a chat with him and snapped a few photos of the boy. Prior to leaving, Mike asked the translators to remind the boy: “Tell Abushe that no matter what anyone says about his eyes, or about him being abnormal, he should always remember that he is really special and his eyes are a gift.”

The blue-eyed boy hasn’t been forgotten. Lafforgue shared an image of Abushe on his Instagram account on Feb. 15, 2019, and wrote: “No one would pay any attention to Abushe, but if you catch a glimpse of his eyes, their incredible magnetic colour will stop you in your tracks.”

The picture garnered over 6,000 likes and captivated the attention of social media users.

Watch a video of this precious blue-eyed boy: