An Ethiopian Airlines pilot told senior managers at the carrier months before one of its Boeing Co. 737 Max jets crashed that more training and better communication to crew members was needed to avert a repeat of a similar disaster involving a Lion Air flight.

According to emails and documents reviewed by Bloomberg News, the pilot in December urged his superiors to bolster training on a 737 Max flight-control feature so crews would be better prepared for what the Lion Airpilots encountered in October before plunging into the Java Sea, killing all aboard.

“It will be a crash for sure,” if pilots struggling with a malfunction of Boeing’s flight-control system on the 737 Max also encountered, for example, a cockpit warning that they were flying too close to the ground, the pilot, Bernd Kai von Hoesslin, wrote in a Dec. 13 email.

On March 10, an Ethiopian Airlines plane operated by two other pilots crashed minutes after takeoff from Addis Ababa, killing 157.

While the crash played out differently from how von Hoesslin described, he accurately foresaw the chaos and peril of multiple cockpit warnings that pilots dealt with during the March crash. Von Hoesslin’s communications add another layer to the competing narratives that have shaped the public’s view of the 737 Max crisis — and of who’s most responsible for what went wrong.

In 418 pages of previously unreported correspondence and documents he sent to airline managers, von Hoesslin cited a number of concerns he said needed to be addressed relating to maintenance, pilot rest and operational procedures. His concerns bring fresh attention to the crash of the Ethiopian Airlines jet, which prompted a worldwide grounding of Boeing’s top-selling passenger jet and the company’s most significant crisis in decades.

Von Hoesslin declined to comment for this story. The documents seen by Bloomberg came from another person who asked not to be identified.

Ethiopian Airlines spokesman Biniam Demssie said by phone: “I can’t comment on anything right now.” The airline has said its pilots have completed all the training that Boeing and the FAA recommended.

It’s unclear whether von Hoesslin’s suggestions for training would have made a difference, said Jeffrey Guzzetti, the former director of the U.S. Federal Aviation Administration’s Accident Investigation Division, noting that crash investigators, regulators and airlines are still evaluating the extent of additional training needed.

“I bet there were numerous other similar discussions within other 737 Max airlines following the Lion Air accident, and I bet considerations were made in some fashion with most of those airlines,” he said.

Von Hoesslin’s bosses at Ethiopian Airlines, as well as the nation’s Transport Minister, have cast suspicion on a malfunction of the 737 Max feature known as the Maneuvering Characteristics Augmentation System. The Chicago-based planemaker, while careful not to be seen blaming a customer, has noted the role pilot actions also played in the Ethiopian and Lion Air disasters.

In both, pilots unsuccessfully battled automatic nose-down movements commanded by MCAS. The movements were triggered by erroneous readings from one of the Max’s two weather vane-like “angle of attack” sensors on either side of the jet’s nose.

In the December email, von Hoesslin reminded managers that flight crews could be overwhelmed by multiple warnings and cockpit alerts that can sound during an errant activation of MCAS. Problems with the system led to the 737 Max’s global grounding in March and shook confidence in Boeing and its regulator, the U.S. Federal Aviation Administration.

Von Hoesslin, who identified himself in the documents as a certified 737 instructor, submitted his resignation to Ethiopian Airlines in April. The documents reviewed by Bloomberg, including the December email urging additional training, were attached to von Hoesslin’s resignation letter.

In his email to several bosses, including those responsible for flight operations and safety, von Hoesslin called attention to the airline’s flight simulator program. The simulators were based on Boeing’s earlier 737 “Next Generation,” or NG, family of jets, and the program didn’t replicate MCAS, he said.

Although regulators and airlines around the world did not require that pilots train on a Max simulator after the Lion Air crash, Hoesslin took issue with the airline’s approach.

“The sim program does not simulate the MCAS, thus using this older NG has serious drawbacks in our training when operating the Max,” von Hoesslin wrote in an email. “I suggest alternate training methods.”

In a separate email in November, von Hoesslin asked airline managers to provide more detail about MCAS to “those Max pilots who are not fully or even aware of how the Max MCAS” system functions. The request came after a flight operations manager at the airline circulated Boeing’s November 6 service bulletin that described, without naming MCAS, how erroneous sensor data could cause the jet to pitch toward the ground automatically, and how pilots should respond.

In response to von Hoesslin, the manager circulated more details about MCAS that the manager said came from Boeing and that explained the automated flight-control feature in greater detail.

Earlier this month, Ethiopian Airlines said it is “among the very few airlines in the world” that operates a full-flight simulator for the Boeing 737 Max 8 but that it wasn’t configured to simulate MCAS.

On May 17, two days after a U.S. House hearing in which Missouri Republican Sam Graves cited pilot error as a factor in the fatal crash, Ethiopian Airlines said in a statement that any effort “to divert public attention from the flight control system problem of the airplane is a futile exercise because it is not based on factually correct analysis.”

While U.S. aviation regulators and Boeing issued warnings in November that included instructions on how pilots should respond to MCAS’s activation, there was no call for simulator training. Ethiopian Transport Minister Dagmawit Moges has said the pilots followed proper procedures issued after the Lion Air crash. 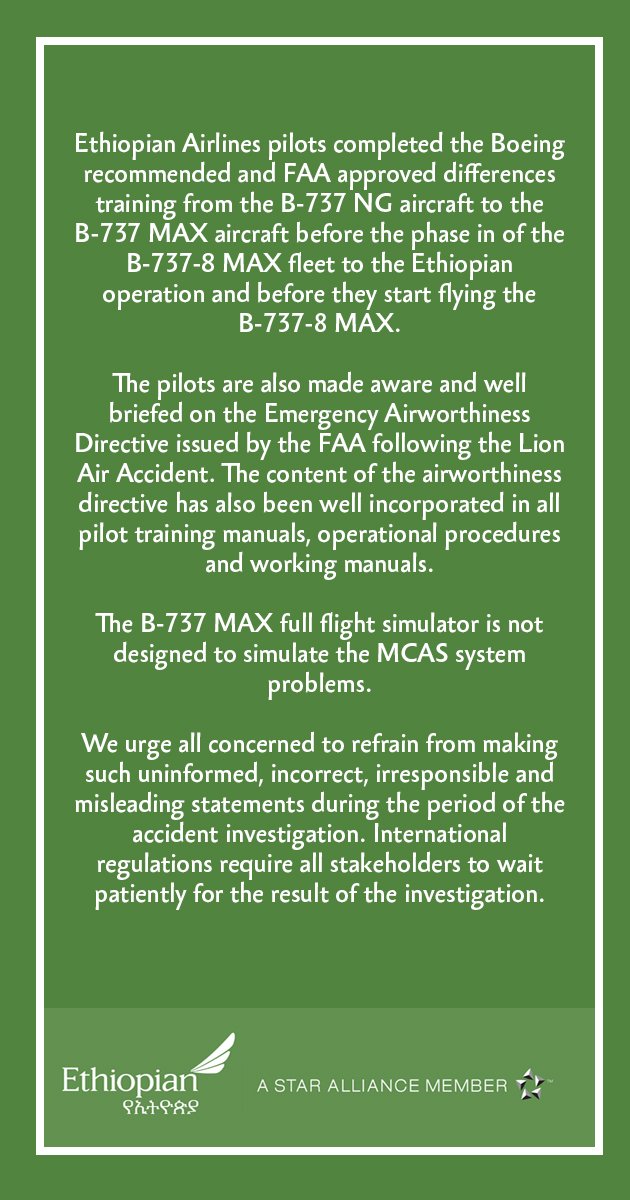 In an April 4 statement, Ethiopian Airlines said the preliminary report into the March 10 crash “clearly showed” that the pilots followed correct procedure.

However, that report shows the pilots left the thrust too high and turned the motor driving MCAS back on after initially switching it off.

In his resignation letter, von Hoesslin said he felt the airline hadn’t fully responded to his complaints.

“Some of these concerns were safety-related and well within the duty of the airline to adequately address,” he wrote.

— With assistance by Alan Levin