September 11, 2016 is the beginning of the 2009 Ethiopian New Year (Meskerem 1, Ethiopian Calendar [E.C.]).[1]
It is painful for me to utter the words, “Happy Ethiopian New Year- 2009” (Melkam Adis Amet) this new year.
2008 E.C. has been a Year of Mourning for the people of Ethiopia.
In 2008 E.C., the Thugtatorship of the Tigrean People’s Liberation Front (T-TPLF) intensified the murderous spree it started a quarter of a century ago in 1991.
Human Rights Watch (HRW) in its June 2016 report documented that “security forces in Ethiopia have used excessive and lethal force against largely peaceful protests that have swept through Oromia, the country’s largest region, since November 2015.”
According to HRW, T-TPLF security forces

shot into crowds, summarily killing people during mass roundups, and torturing detained protesters. Because primary and secondary school students in Oromia were among the early protesters, many of those arrested or killed were children under the age of 18. Security forces, including members of the federal police and the military, have arbitrarily arrested students, teachers, musicians, opposition politicians, health workers, and people who provided assistance or shelter to fleeing students.

The T-TPLF massacres in 2008 E.C. have been so atrocious even the Obama Administration, the protector,  guardian and benefactor of the of T-TPLF support, was forced to diplomatically express its horror and disgust.
Last week, Samantha Power, the U.S. ambassador to the United Nations, expressed “grave concerns”  about the “excessive use of force against protesters in Ethiopia.”
Power described the T-TPLF “violence” as “extremely serious” and called for a transparent and independent investigation. Power said “the U.S. has asked the government to allow people to protest peacefully.”
All that mumbo jumbo is diplomatic-speak for, “The T-TPLF has committed large-scale crimes against humanity. A credible international investigation is needed to bring the perpetrators to justice. The T-TPLF should let peaceful demonstrators peacefully demonstrate.”
On August 10, 2016, the head of the United Nations High Commission for Human Rights demanded that the T-TPLF “allow international observers into restive regions” where scores of unarmed demonstrators have been massacred by T-TPLF forces to conduct an investigation. The T-TPLF thumbed its nose (or did it flip the bird at) on the High Commissioner.
On August 21, 2016, Tom Malinowski, U.S. Assistant Secretary of State for Democracy, Human Rights, and Labor and Obama’s  global messenger of democracy and human rights declared the T-TPLF’s “tactics in response to protests in the Oromia and Amhara regions of the country are ‘self-defeating’”.
That is diplomatic-speak for, “The more innocent people the T-TPLF massacres, the more it dooms and seals its fate. Those who live by the sword shall die by the sword.”
The fact of the matter is that the  T-TPLF can’t run and can’t hide. It has reached the end of the line!
On September 6, 2016, the European Union (EU) took action and cut off funds from its Emergency Trust Fund going to the T-TPLF. The EU statement declared: “As far as the Emergency Trust Fund for Africa is concerned, it is important to know that no funding are decentralised to, or channelled through, the beneficiary countries’ government structures.” In other words, the EU will no longer feed the T-TPLF Beast.
In America, September 11 is a day that shall live in infamy.
On September 11, 2001, the terrorist group al-Qaeda coordinated four attacks in the United States massacring over 3,000 innocent civilians and causing property damage in untold billions.
Americans and the whole world reacted with horror and outrage at the work of Al Qaeda.
Yet, when the T-TPLF, an organization listed  as a terrorist organization in the Global Terrorism Data Base, commits massacres and crimes against humanity on an industrial scale in broad daylight day after day, the Obama Administration turns deaf ears and blind eyes.
Aah! The double standard on global terrorists.
The Obama Administration’s attitude is, “The T-TPLF may be a terrorist organization. But they are OUR terrorists.”
Not unlike President Franklin D. Roosevelt’s attitude towards the Latin American dictator Somoza Garcia. “Somoza may be an S.O.B., but he’s our S.O.B.” 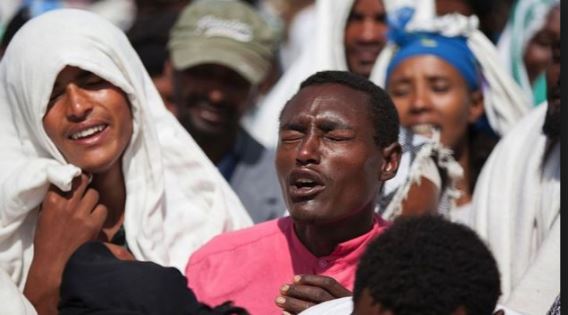 Ethiopians have nothing to celebrate in September 2009 E.C.
September might as well be November for them.
Perhaps Thomas Hood should have titled his poem “November”,  “September 2009 E.C. in Ethiopia”.
No sun – no moon!
No morn – no noon –
No dawn – no dusk – no proper time of day.
No warmth, no cheerfulness, no healthful ease,
No comfortable feel in any member –
No shade, no shine, no butterflies, no bees,
No fruits, no flowers, no leaves, no birds! –
September is November in Ethiopia!
Freedom, Democracy and Human Rights shall shine like the sun in Ethiopia in 2009 E.C.
The silver lining in the dark cloud that envelopes Ethiopia today is that the battle against EVIL is joined.
It is the final battle joined to win the hearts and minds of the Ethiopian people.
It is not a battle joined with guns, rockets, missiles and tanks.
It is a battle joined with courage, audacity, bravery and determination.
It is a battle joined to ensure the victory of democracy, freedom and human rights over tyranny in Ethiopia.
The weapon the people of Ethiopia are using to win the battle of hearts and minds is the most powerful known to mankind, even more powerful than the hydrogen bomb. It is the weapon of nonviolence. 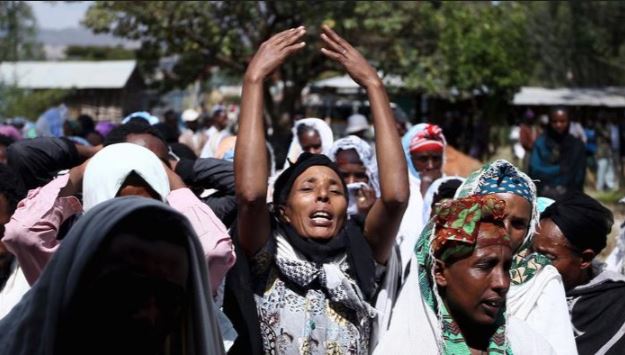 Ethiopians have proven the power of nonviolence by engaging in massive acts of civil disobedience, civil resistance, noncooperation, mass demonstrations, protests and marches, vigils, symbolic acts of defiance at international sports events, store shutdowns by merchants and work slowdowns, economic boycotts, selective patronage, road blockages, cancellation of social activities and musical concerts, stay-at-home protests, popular and disguised disobedience, mutiny by military personnel and many other methods.
Nonviolence does not work without unity of spirit, without commonality of purpose and without collective action.
Today, Ethiopians are showing unity in our cause of freedom, democracy and human rights. Ethiopians are showing their unity in their common destiny.  Ethiopians are showing their unity in their collective resolve to fight and defeat tyranny. Ethiopians are showing their unity in the future of their children, Ethiopia’s Cheetah Generation.
Where there is unity, there is always victory. Always!
Ethiopians, victory is at hand because Ethiopia stretches out her hands to God.
Almost 159 years to the month, the great African American anti-slavery fighter Frederick Douglass delivered a speech which I believe carries a timely, compelling and poignant message for Ethiopians struggling under a quarter century of bondage imposed by a gang of tyrannical thugs.
Douglass’ speech is today remembered for the line: “If there is no struggle, there is no progress.”
I have edited below Douglass’ speech to highlight his timeless message, which I wish to share as my own, with all Ethiopians in the Ethiopian New Year:

The general sentiment of mankind is that a man who will not fight for himself, when he has the means of doing so, is not worth being fought for by others, and this sentiment is just. For a man who does not value freedom for himself will never value it for others, or put himself to any inconvenience to gain it for others. Such a man, the world says, may lie down until he has sense enough to stand up.
A man of that type will never lay the world under any obligation to him, but will be a moral pauper, a drag on the wheels of society, and if he too be identified with a peculiar variety of the race he will entail disgrace upon his race as well as upon himself. The world in which we live is very accommodating to all sorts of people. It will cooperate with them in any measure which they propose; it will help those who earnestly help themselves, and will hinder those who hinder themselves. It is not within the power of unaided human nature to persevere in pitying a people who are insensible to their own wrongs and indifferent to the attainment of their own rights. The poet was as true to common sense as to poetry when he said,
Who would be free, themselves must strike the blow.
When [an Irish patriot fought]  for the just rights and liberties of Ireland, the sympathies of mankind were with him, and even his enemies were compelled to respect his patriotism. [When a Hungarian patriot] fighting for Hungary with his pen long after she had fallen by the sword, commanded the sympathy and support of the liberal world till his own hopes died out. The Turks, while they fought bravely for themselves and scourged and drove back the invading legions of Russia, shared the admiration of mankind. They were standing up for their own rights against an arrogant and powerful enemy.
In the great struggle now progressing for the freedom and elevation of our people, we should be found at work with all our might, resolved that no man or set of men shall be more abundant in labors, according to the measure of our ability, than ourselves.
Let me give you a word of the philosophy of reform. The whole history of the progress of human liberty shows that all concessions yet made to her august claims have been born of earnest struggle. The conflict has been exciting, agitating, all-absorbing, and for the time being, putting all other tumults to silence. It must do this or it does nothing. If there is no struggle there is no progress. Those who profess to favor freedom and yet deprecate agitation are men who want crops without plowing up the ground; they want rain without thunder and lightning. They want the ocean without the awful roar of its many waters. (Emphasis added.)
This struggle may be a moral one, or it may be a physical one, and it may be both moral and physical, but it must be a struggle. Power concedes nothing without a demand. It never did and it never will. Find out just what any people will quietly submit to and you have found out the exact measure of injustice and wrong which will be imposed upon them, and these will continue till they are resisted with either words or blows, or with both. The limits of tyrants are prescribed by the endurance of those whom they oppress.  (Emphasis added.)
Men may not get all they pay for in this world, but they must certainly pay for all they get.If we ever get free from the oppressions and wrongs heaped upon us, we must pay for their removal. We must do this by labor, by suffering, by sacrifice, and if needs be, by our lives and the lives of others.
Again, I am aware that the insurrectionary movements of the slaves were held by many to be prejudicial to their cause. This is said now of such movements at the South. The answer is that abolition followed close on the heels of insurrection in the West Indies, and Virginia was never nearer emancipation than when General Turner kindled the fires of insurrection at Southampton.

Weeping may last through the night, and even the year, but joy comes in the morning, in 2009 E.C.!
In 2009 E.C., I wish everyone one thing only: “OUT WITH THE OLD AND IN WITH THE NEW.”
2009 E.C. shall be the year of cleaning out the national closet and a race to the dustbin of history.
Meskerem 1, 2009 E.C. shall  go down in Ethiopian history as the dawn of freedom, democracy and human rights in Ethiopia.
The people of Ethiopia are on the move.
Ethiopia’s Cheetahs are on the prowl.
The 25 year-old Plague of the T-TPLF shall end 2009 E.C. So it is written.
“Weeping may last through the night, but joy comes with the morning” in 2009 E.C.
——————-
[1] https://en.wikipedia.org/wiki/Ethiopian_calendar