A lengthy Addis Voice investigation can reveal that Dr. Constantinos Berhe, a professor of public policy at the Addis Ababa University (AAU) and a key operative of the ruling TPLF-led regime, obtained two fake degrees from a bogus university. After claiming for many years to have earned an MA degree from Oxford University and a PhD from University of California (?), the “professor” finally admitted to AV that he got a Masters of Business Administration (MBA) and a PhD from American Century “University” (ACU).

The bogus university (formerly Century University), which claims to be based in Albuquerque, New Mexico, is a diploma mill that sells fake degrees online.In the course of our investigation, this reporter contacted ACU as a prospective graduate student and was offered MBA and PhD degrees for “graduation” within six weeks with a price tag of $4000. He was also granted a bogus scholarship with a total “value” of $15,225 despite the fact that the degrees and transcripts are worthless.
The offer was made by ACU’s CEO and administrative director, Allen Mirzaei (aka Ali Mirzaei). He also added that work experience was part of the academic deal. The CV I submitted to the university contained fictitious institutions and companies such as Yewishet (fake) International University, Con Art Global PLC and Ethiopian Democratic Guarantee Agency. “The faculty adviser reviewed your CV and based on your extensive experience, the University will give credit for 6 courses or 24 semester units,” Mirzaei emailed back.
The Iranian-American diploma mill CEO, further promised that 90 percent of the speedy coursework, which includes “book reports and a dissertation”, would be done by his faculty. “If earning a valid degree from a legitimate American University is important to you, then you must put in some study time (10%), and our faculty will help you with 90% to insure [sic] you have supporting documentation to earn the degree,” he said in an email. Mr. Mirzaei also promised that his degrees would be authenticated by the New Mexico Higher Education Department and the State Department as “legitimate degrees.”
“Our university is able to obtain authentication from New Mexico Higher Education Department and the Department of States of America (Washington DC) for all our degrees offered as a legitimate degree,” he wrote in his email. But Diane Vigil-Hayes, School Administrator and Compliance Officer at New Mexico Higher Education Department, pointed out that the department never accredits universities and colleges as it is not an accrediting agency. The department clearly states that even if it issues licensure permits, based on submitted curriculum to an institution operating in New Mexico, the department does not give an approval or endorsement to an institution’s academic program. “An institution licensed by the Department may not use terms such as “accredited,” “endorsed,” or“recommended” in reference to its approval by the Department,” according to department’s guidelines.
Former FBI special agent and expert on diploma mills, Allen Ezell, and Dr. John Bear, a leading expert on higher education qualifications and academic fraud, noted that the degree scam, which has thrived online by leaps and bounds in the last two decades, has grown into a billion-dollar industry. The business model of the degree mills is based on selling fake university degrees around the world to people willing to pay the price and take the risk, they noted in their book “Degree Mills: The billion-dollar industry that has sold over a million fake diploma .”

No one within the TPLF ruling elite probably wears as many hats as “Professor” Berhe (aka Costantinos Berhe or Costy). A cursory look at his lengthy résumé and Linkedin profile reveals that besides being a professor at AAU’s School of Graduate Studies, College of Business and Economics,he is the chairman and president of various groups and NGOs including Lem Ethiopia, an environmental group, that he co-founded with his longtime friend and ex-President Girma Woldegiorgis over two decades ago. The professor has extensive and privileged connection with high profile businessmen and the international community. Ironically, he even sat on the 2nd African Union Advisory Board on Corruption (2011-2013).

Though his CV says little about his role in the tyrannical TPLF regime, reliable sources say that he plays a key role as a trusted advisor in the security apparatus, having closer ties with TPLF’s top spies and torture czars. “Given his multiple roles, it may not be surprising to find this powerful man of ‘refined’ tastes for good cigars and wine in many places at the same time,” a reliable source said.
It turned out that Dr. Solomon Barnabas, president of the Ethiopian Bar Association, that was set up under the tutelage of the TPLF regime, also obtained an MBA in International Business and PhD in International Relations from the same diploma mill. “After he got his PhD, he thought [sic] various MA and LLM courses at the AAU and Ethiopian Civil Service Universities [sic],” according to his profile on the association’s website. 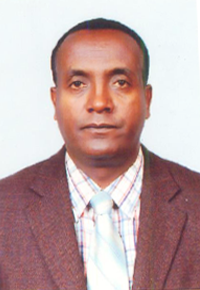 While some dubious pro-TPLF faculty members like Mr. Berhe find it easy to secure tenure and promotion with fake degrees, critical faculty like Dr. Dagnachew Assefa and Dr. Merera Gudina constantly complain about the university’s discriminatory policies and refusal to renew employment contracts.
Before he admitted that he was a “graduate” of the ACU, Mr. Berhe listed on his Linkedin profile and CVs that he got his graduate degrees from prestigious universities, Oxford University (1975) and University of California (with no specific campus) in resource economics in 1999. When Addis Voice challenged him on his dubious credentials, the professor said it must have been a mistake and blamed the problem on his secretaries.
Since Meles Zenawi fired 42 professors and lecturers from AAU in early 1990s, including six full professors from a total of eleven in the university, it has been permanently haunted by TPLF’s spectre of discrimination. Like most state-run institutions, the Addis Ababa University administration is widely accused of discrimination against staff, students and faculty that do not support the oppressive TPLF regime. Highly experienced academics that are perceived to hold critical views toward the regime face discrimination, job insecurity and in some cases unfair dismissals. Academic freedom remains a far cry.
ACU advertises on its website and other online platforms that it has a main campus in Albuquerque, New Mexico, and another one in Silicon Valley, San Jose. “All campuses include modern office buildings, parking facilities, computer labs, medical labs, HVAC labs, biotech labs and solar labs, consisting of computers, medial [sic] lab equipments, air conditioning and heating systems as well as solar technology and biotechnology lab equipment for training.”
Our investigative team found no evidence of any campuses or labs but one-room offices at the sites. The university’s San Jose office at 1885 Lundy Avenue (ACU’s Silicon Valley “campus”) was vacated a few weeks ago while the Albuquerque office, staff by just one part-time staff, is mostly closed, our LA based associate Mesfin Hailu reported.

It appears that there are also other officials and people within the TPLF-led regime who have purchased fake degrees from abroad. We will return on that with more investigative report.