By Amanuel Biedemariam,
In an interview with Ethiopian Television, while discussing Diplomacy with Eritrea and the region, the Foreign Minister of the minority regime of Ethiopia Dr. Tedros Adhanom said,
“Ethiopia has good relations with all IGAD member-countries. Eritrea is the only country we do not have good relations with and our position has been clear all along. We want good neighborly relations with Eritrea. It is, however, Eritrea that has not been willing to do so. Therefore, we are working to nurture people- to-people relations by accepting Eritrean refugees, schooling and treating them well…”
In short, advertised for more refugees from Eritrea sidestepping the government of Eritrea.


It is ironic that Dr. Adhanom chose to talk about Eritrean refugees on November 20th when Ethiopians were publicly suffering inhuman torture, killing, gang-rape, mass-arrest and ethnic/religious cleansing in the Middle East. It is also telling that Dr. Adhanom tried to inject Diplomacy and Eritrean refugee issues callously at a time when Ethiopians are screaming for some attention for their fellow Ethiopians everywhere. In his recent article “Teachable Moments for the Ethiopian Diaspora?”   Dr. Alemayehu G. Mariam writes,
“The reactions of Diaspora Ethiopians and the regime in Ethiopia over the abuse and mistreatment of the migrant workers were in sharp contrast. As Diaspora Ethiopians stood up for their compatriots in Saudi Arabia, the regime in Addis Ababa was backpedalling, bending over backwards and falling head over heels to bootlick and apologize to the Saudis. It was nauseating!”
Continues:
“Tedros Adhanom, the malaria researcher-turned-instant-foreign-minster and the man being groomed to become prime minister after the 2015 “election” had the nerve to state in public, “Ethiopia would like to express its respect for the decision of the Saudi Authorities and the policy of deporting illegal migrants.” He confessed he was “really depressed” by the mistreatment of Ethiopians in Saudi Arabia and told off the Saudi ambassador have it. “It is unacceptable”, declared Adhanom with diplomatic panache. In an attempt to show how he and his regime have things under control, Adhanom bellowed, “I would like to assure you that we are ready to receive our fellow citizens home.”
“It was a pathetic display of indifference, incompetence and inanity. How could one “respect” the policy of another country that condones the dehumanization of its citizens? How could any person in his right mind choose the meaningless diplomatic word “unacceptable” to describe the rape, murder, mutilation, torture and lynching of one’s brothers and sisters in a foreign land? How does one retreat into personal “depression” and “sadness” without lashing out with righteous indignation and outright diplomatic outrage and fury?”
This shows the duplicity of yet another TPLF agent that is trying to maintain power deceiving and playing the people of Eritrea and Ethiopia. However, schemes that this dying regime plays are now exposed instantly because it has become clear to all that these gangsters do not intend to do right by the people of Eritrea, Ethiopia, Somalia and others in the region. It is also clear that the gang is hell bent on ensuring its interests at the expense of the people in the region. They are not interested to ensure social justice, peace and stability.
Contrary to Dr. Tedros’s lies, Eritrea has repeatedly asserted her willingness to establish relations as soon as Ethiopia withdraws from illegally occupied Eritrean territories. While addressing the African Union (AU) on April 26, 2011, Ambassador Girma Asmerom Eritrean representative at the AU said,
“I want to assure you that once Ethiopia vacates sovereign Eritrean territory including Badme, the Government of Eritrea is ready and willing to normalize its relation with Ethiopia and to engage the Government of Ethiopia in constructive dialogue on issues that are relevant and beneficial to the people of Eritrea and Ethiopia as well as the stability of our region.”
Regarding Eritrean refugees in Ethiopia, Dr. Adhanom’s statement is stark opposite to the reality on the ground.
In October 7, 2013, because of years of mistreatment riots broke-out in refugee camps andthree were reported dead. The riots were sparked due to lack of opportunities and after years of abuses on the hands of Ethiopian authorities. Eritrean refugees are regularly deceived byTigrayans that are using identities of Eritrean refugees to migrate to the US and other Western nations as Eritrean refugees.

Eritrean refugees in Ethiopia are targets of human traffickers; and Ethiopian military and TPLF authorities are complicit in the trafficking of Eritreans into Sudan and the Sinai which lead to the death and dismemberment of thousands. These activities were designed, funded and supported by the late Meles Zenawi and his Eritrean crime collaborates like Meron Estifanos who openly admitted paying traffickers to encourage others to do the same.Selam Kidane, Elsa Chyrum,Tesfaldet Meharena owner of Asmarino.com and others are regular visitors to Ethiopia and leaders in matters pertaining to Eritrean refugees and their plight. They have been scheming with Ethiopia authorities to encourage Eritrean youth to flee in order to deprive Eritrea of her youth that are defending and building their nation. Dr. Adhanom is simply a continuation of what Meles Zenawi started supported by the US at the presidential level.
President Barak Obama while speaking at the Clinton Global Initiative on September 25, 2012 in New York said,
“I recently renewed sanctions on some of the worst abusers, including North Korea and Eritrea. We’re partnering with groups that help women and children escape from the grip of their abusers. We’re helping other countries step up their own efforts. And we’re seeing results. More nations have passed and more are enforcing modern anti-trafficking laws.”
Azezet receiving the 2012 Trafficking in Persons (TIP) Report Hero Award
Prior, on June 19, 2012, former U.S. Secretary of State Hillary Rodham Clinton honored Azezet Habtezghi Kidane of Israel, a 2012 Trafficking in Persons (TIP) Report Hero, at the U.S. Department of State in Washington, D.C.  Sister Azezet collaborates with Mussie Zerai that gladly paraded the award hailing it as major achievement and disseminated pictures they took with US authorities.
Mussie Zerai’s hands are all over. To highlight the depth of his involvement here is a letter that recently became public about transferring Eritrean refugees to Ethiopia. 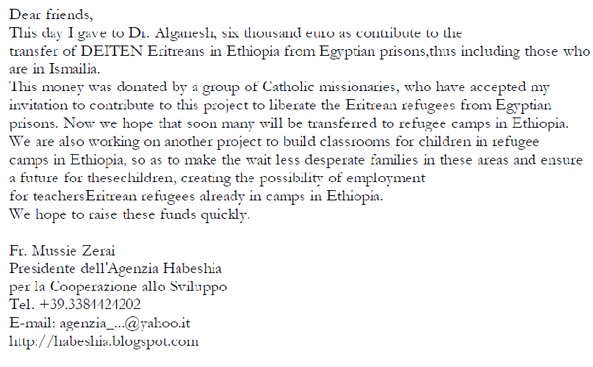 Priest Mussie’s letter informing his group of his efforts to transfer Eritrean refugees to Ethiopia. Obviously, he cannot do that unless Ethiopian officials are cooperating with him.


Eritrea Central to the Politics of Ethiopia

.
The agendas of the US, the TPLF and their Eritrean crime-collaborators collude as they all try to destabilize Eritrea. For the minority regime of Ethiopia making Eritrea the center of all politics serves as diversion from all woes plaguing Ethiopia, woes the TPLF created deliberately. Hence, whenever the situation in Ethiopia demanded public attention the TPLF injects Eritrea even to the point of provoking war.
The regimes main goal is to weaken Eritrea and ensure that Ethiopia cannot be strong enough to challenge the future Greater Tigray. The TPLF is deliberately mishandling Ethiopia to weaken it and when Eritrea is destabilized the agenda has greater chance to succeed. That is reason why TPLF chose Eritrean collaborators that are regionalist and religious extremists to divide and conquer.
Moreover, by linking every opposition to Eritrea and by designating Ethiopian oppositions asTerrorists, the TPLF tries to paint Eritrea with the label of state-sponsor of terrorism but failed. But did that stop Ethiopians from opposing the regime? To the contrary, the TPLF is asking to talk to Ginbot 7, an exiled opposition group. Over the last decade the TPLF earned its living selling terrorism. It did so in Somalia, worked tirelessly to link Eritrea with every group in Somalia with fabricated stories, and failed.
When the late Meles Zenawi was in his death bed, the TPLF and its Eritrean partners spewed lies about the health of President Isaias Afewerki to divert attention. And true to form, when Ethiopians are rising-up against TPLF’s incensed by developments in the Middle East, their Eritrean partners are vigorously churning lies to divert attention. Lying first, about the health of President Isaias Afewerki again and when exposed, about Generals Sibhat Efrem and General Gerezgheri “Wuchu” Andemariam etc…

.
The US takes nearly all of their Eritrea demonization queues from the regime in Ethiopia that bets on Eritrea’s failures. Every time they come up with a new line to incite chaos based on Eritrea’s perceived weaknesses Eritrea foils it simply by overcoming the hurdle. From 2000 the hurdles that Eritrea faced were barriers deliberately created to impede Eritrea’s progress.

In 2000, aid the UN slated for Eritrea was sabotaged forcing Eritrea to buy food from outside market. These parties turned around and mocked Eritrea for lack of food and the Wall Street Journal showed Eritreans lined trying to buy bread. Eritrea has turned to green and assured food security since.
Now Eritrea is at a point of no return at a level unreachable to them by unearthing resources and exploiting advantages while they frantically work to stop it. Again, they are being exposed because they cannot stop the progress that is based on solid foundation and beyond their capacity to reach.
To Conclude:
Over the last 15 years, lies, misinformation, disinformation, deceit and diplomatic one-upmanship has become accepted way of life for a regime that can only survive in chaos. Peace stability, prosperity, education, cross-border-cooperation, health and regional cooperation do not serve their interests. So they try to perpetuate the art of deception to elongate their life. However, over the years, people understood how the process of their deception works. People understand the intent behind all the lies.
The people of Eritrea, Ethiopia, Somalia and the region do not need chaos. They need hope and direction toward a better future based on cooperation in a peaceful and stable environment. Clearly, the only impediment is the minority TPLF regime in Ethiopia.
The TPLF’s machine of lies has churned up all the lies it could and it is hitting walls. In short, the shelf life of their deceit has expired. People are no longer buying these lies, a sign of their imminent demise.
– – – – – – – – – – – – – – – – – –
The writer is an Eritrean-American activist and political analyst. He can be contacted through [email protected]