“They will end up blowing up the dam,” US President Donald Trump said, referring to Ethiopia, adding, “I say it loud and clear, they’ll blow up that dam.”

Ethiopia condemned US President Donald Trump’s comments that the country could “blow up” the Grand Ethiopian Renaissance Dam (GERD) that straddles the Blue Nile, as it accused the United States President of ‘inciting war’. Trump was speaking with respect to the national security of the two countries downstream the reservoir, Egypt, and Sudan, while he was brokering the normalizing of Sudan’s ties with Israel on Friday. “They will end up blowing up the dam,” Trump said, referring to Ethiopia, adding, “I said it and I say it loud and clear, they’ll blow up that dam. And they have to do something,” as he addressed the US press.

Addis Ababa issued a statement on October 24, asking the US president to “clarify” his remarks, explaining that the GERD is, in fact, an affirmation of “Ethiopia’s commitment for equitable and reasonable utilization of the Abbay River.” Ethiopian Prime Minister Abiy Ahmed’s office issued a statement, saying, that the east African nation would not tolerate “aggressions of any kind.” In a further escalation on the matter, Ethiopian Foreign Minister Gedu Andargachew summoned the US Ambassador Mike Raynor for an explanation of the US President’s “irresponsible” comments and “belligerent threats”, according to a statement from the ministry.

“These threats and affronts to Ethiopian sovereignty are misguided, unproductive, and clear violations of international law,” Ethiopia warned, without naming the US in the official statement.

It added, ”As a developing nation, Ethiopia may be confronted with poverty but are rich with history, patriotic citizens whose commitment to defend their country’s sovereignty is unparalleled and ambition and a well-articulated plan for prosperity.”

Meanwhile, Former Ethiopian Prime Minister Hailemariam Dessalegn said in a tweet that the President of the United States launched a “reckless” statement to the Sudanese PM having “no clue” what he is talking about. “The incitement of war between Ethiopia and Egypt from a sitting U.S. president neither reflects the longstanding partnership and strategic alliance between Ethiopia and the United States nor is acceptable in international law governing interstate relations,” a statement issued by the Ethiopian Foreign Affairs Minister Gedu Andargachew read. Trump’s comments were made in the backdrop of US cutting aids to Ethiopia after news of it “filling the reservoir” behind the dam in July circulated.

Dispute around the Dam

The $4bn structure being constructed by Ethiopia on the Blue Nile is Africa’s largest hydro-electric project, however, Ethiopia’s filling of the reservoir has severely impacted Sudan and Egypt. Even as Sudan lies on farther end downstream than Cairo, the dam is expected to cause acute water shortages for both countries. While the US earlier held negotiations with the three countries, it leans with Egypt and Sudan in the dispute. Meanwhile, Ethiopia calls the GERD construction “essential” for its economic development. 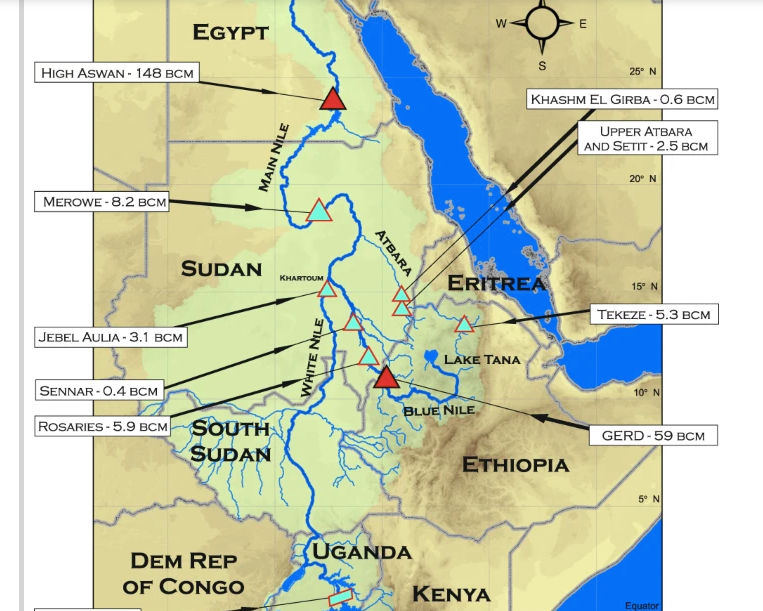 [Map of the Nile Basin with major infrastructure and the three countries’ strategic location around the dam construction. Credit: Nature Journal]

Cause of the controversy

US President Donald Trump,  on a telephonic conversation with Sudan’s Prime Minister Abdalla Hamdok and Israel’s PM Benjamin Netanyahu at the White House, made the controversial remark, asserting, Ethiopia was “going to blow up the dam”, in an unsubstantiated claim. He was in front of reporters and the diplomatic event of normalising bilateral relations between Sudan and Israel was being live-streamed across multiple TV stations. “It’s a very dangerous situation because Egypt is not going to be able to live that way,” Trump said, in context to Sudan’s Prime Minister Abdalla Hamdok’s remark that the three countries look for “peaceful resolution” to the conflict. “ They’ll blow up that dam,” the US President asserted in a remark even as the negotiations have been ongoing with African Union began mediation for a solution. PM Abiy Ahmed is yet to respond on Trump’s comments.

Read: Barack Obama Criticises Donald Trump For ‘getting Mad And Walking Out’ Of Interview