Every November since 2007, I have written annual memorial declarations and tributes in remembrance of the hundreds of innocent victims of the Meles Massacres of 2005.
Following the parliamentary elections in May 2005, security and police forces under the direct command and control of Meles Zenawi, the late leader of the Tigrean People’s Liberation Front (TPLF), massacred and seriously injured hundreds of unarmed protesters in the streets and scores of defenseless inmates at Akaki prison.
An official Inquiry Commission established by Meles Zenawi documented 193 unarmed men, women and children demonstrating in the streets and scores of other detainees held in a high security prison were intentionally and deliberately shot and killed by police and security officials. An additional 763 suffered life-threatening gunshot injuries. (See footnotes below.)

The Commission lay the entire blame on Meles Zenawi and his TPLF regime.
The Meles Massacres changed my life.
Before the Meles Massacres of 2005, I was an academic and a defense lawyer with barely a passing interest in Ethiopian affairs or politics.
After the Meles Massacres, I faced several stark choices: 1) pretend the massacres did not happen; 2) express fleeting private moral outrage and conveniently forget the whole thing; 3) hope someone will take up the cause of these victims of crimes against humanity and I can watch indifferently from the sidelines, or 4) take an active advocacy role and prosecute the criminals and their foreign supporters in the court of world public opinion.
I embraced the old saying, “The only thing necessary for the persistence of evil is for enough good people to do nothing.”
I did what I could to persistently resist EVIL.
I have used my pen/keyboard every week for the past nearly 13 years every single week to prosecute and convict the TPLF criminals against humanity in the court of world public opinion.
Truth be told, I did not choose to beome an advocate for the victims of the Meles Massacres, nor did I choose to become a human rights advocate.
Meles Zenawi chose me to become his nemesis human rights advocate when he ordered the massacre of those unarmed protesters in 2005!
The victims of the Meles Massacres chose me to become their witness and prosecutor in the court of world public opinion.
The Meles Massacres turned out to be a defining moment in my life.
I realized that even though I thought I had permanently moved out of Ethiopia, Ethiopia had not permanently moved out of me. In fact, Ethiopia was always in my heart and mind.
I thought if I ignored her long enough and pretended she did not exist, she’d just leave me alone.
She did not.
It has been said that in desperate times we either define the moment or the moment defines us. In my case, it was both.
In November 2018, I now stand tall and proud pointing an accusatory finger at the TPLF leaders who conspired, aided and abetted, acted in concert or in complicity or in any form collaborated in the implementation of the Meles Massacres.
In November 2018, I stand as a witness asking to be heard on behalf of the  victims of the Meles Massacres. I can hear their cries from 10,000 miles begging for JUSTICE.
The victims of the Meles Massacres deserve JUSTICE!
Many people ask me, “Why are you so fixated on those killed after the 2005 elections? It happened a long time ago. Whatever you do will not bring them back. Why do you want to open old wounds? Meles and the TPLF have massacred, jailed and tortured hundreds of thousands. What are you going to do about those victims? Let bygones be bygones. Sometimes there are things in life that you can do nothing about.Forget about it and go on with your life.”
Hear me good, one and all!
I am not going to forget the victims of the Meles Massacres.
I am not going to forget the perpetrators of the Meles Massacres.

Never. Never. Never!
Simon Wiesenthal, Tuviah Friedman, Serge and Beate Klarsfeld, Ian Sayer, Yaron Svoray, Elliot Welles, and Efraim Zuroff and many others like them did not say, “Forget about Adolf Eichmann, Klaus Barbie, Josef Mengele, John Demjanjuk, Gerhard Sommer” and so many others who committed atrocities on innocent Jews.
It took Weisenthal and the others decades to bring the Nazi monsters and butchers to justice.
History is a witness.
The Nazi thugs Martin Bormann, Karl Doenitz, Hermann Goering, Rudolph Hess, Alfred Jodl, Joachim Ribbentrop, Albert Speer, Fritz Sauckel, Ernst Kaltenbrunner and many others like them believed they would rule for a thousand years. They thought they were above the law; they were the personification of the law and could commit any crime with impunity.
But in the end, they were held accountable. 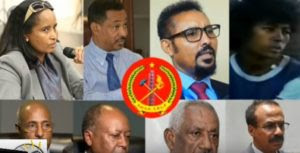 The TPLF thugs, like the Nazi thugs, also believed they  were the law and will rule for 100 years. They too must be held to account for the untold crimes against humanity they have committed on the people of Ethiopia.
Why not start with the victims of the Meles Massacres?
We have the evidence of crimes against humanity lock, stock and barrel.
I will do whatever I can to bring the TPLF monsters and butchers responsible for the Meles Massacres to JUSTICE.
If I had the help of my Ethiopian brothers and sisters, we could bring them to the bar of justice much sooner.
Ben Franklin said, “Justice will not be served until those who are unaffected are as outraged as those who are.”
I know there are some people who wonder why I have “wasted” a good part of my life trying to get justice for the “nobodies” Meles and his TPLF thugs massacred.
It is precisely because they are “nobodies” that I stand up fr them.
In the poetic words of Eduardo Galeano, the Meles Massacre victims were “nobody’s children, owners of nothing./ They are not human beings, but human resources./ They do not have names, but numbers./ They are nobodies, who are not worth the bullet that kills them.”
For Meles Zenawi and his TPLF thugs, the unarmed protesters exercising their right to peaceably protest in 2005 are not worth the bullets used to kill them.
I ask myself, “Who will remember the “nobodies” of Ethiopia, if I don’t?”
I ask myself, “Who will defend the “nobodies” of Ethiopia, if I don’t?”
I ask myself, “Who will seek justice for the “nobodies” of Ethiopia, if I don’t?”
That is why I am so obsessed with getting justice for the victims of the Meles Massacres.
I know the late Meles and his TPLF goons used to laugh at me thinking I was crazy for thinking they would ever be held accountable for their monstrous crimes.
In 2012, I told them, “Justice will also arrive like a slow, chugging and delayed train for those who have committed crimes against humanity and war crimes in Ethiopia.”
But they laughed at me.
I don’t mind them laughing at me or their delusional dreams.
But justice for the victims of the Meles Massacres is no laughing matter to me.
Everyday the victims of the Meles/TPLF regime cry out for justice from their graves, and observing the fact that nobody remembers these nobodies, it seems I am the only living witness to testify on their behalf.
But all Ethiopians are witnesses to the victims of the Meles Massacres.
I believed then and do so now that these nobodies Meles Zenawi massacred must never be forgotten. Most importantly, they must get JUSTICE!
We must always remember and seek justice for them because they sacrificed everything for our freedom, and for democracy and rule of law in Ethiopia.
Justice for the “nobodies” Meles Zenawi and his TPLF gang massacred
I have no doubts Meles Zenawi will face divine justice for ordering the massacres of 2005.
But Meles Zenawi’s henchmen who aided and abetted in the massacres are still walking the streets free. They must be brought to justice.
To add insult to injury, these very henchmen are still instigating, directing, planning and financing atrocities from their high-rise hideouts in Mekele.
They must be brought to the bar of justice.
I have always believed justice in Ethiopia is like a train delayed.
Ethiopia today is running two trains: a love train and a justice train.
Cornel West said, “Never forget that justice is what love looks like in public.”
In 2010, I wrote a poem for the victims of the Meles Massacres in the Huffington Post.
It was patterned after Thomas Hood’s poem, “November”.
“No Justice for the Victims of the Meles Massacres”

No justice for the hundreds Meles massacred,
No redress for the countless men, women and children,
No restitution for the survivors or victims’ families.
No reprieve for the tens of thousands illegally jailed,
No trace of those who disappeared,
No atonement for the crimes of September, October, November….
No absolution for the Meles slaughter of November, December, January…,
No repeat of November,
November is to remember.

The late Meles Zenawi and his TPLF gang would like to make their victims nameless, faceless, bodiless, friendless and nobodies.
But I will not let them!!! 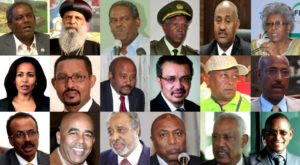