Ethiopians are angry that the country’s text messaging service has been shut down since Thursday without any explanation.

Internet blackouts, which began last Tuesday, are also still affecting many areas of the country.

The state-run Ethio Telecom, the country’s only telecoms provider, has refused to comment on the outages.

The closure of the services coincides with nationwide exams, which some say may be the reason for the shut down.

There has been speculation the measures are aimed at trying to stop students cheating, the BBC’s Kalkidan Yibeltal reports from the capital, Addis Ababa.

The messaging app Telegram, which is popular among young Ethiopians, also remains inaccessible.

The internet was shut down in 2016 and 2017 to curb the leaking of exam papers amid popular anti-government protests.

This is the first time since he came to power that there has been a clampdown – and the lack of any official explanation is a reminder of the behaviour of previous governments.

After protests that followed disputed elections in 2005, the text message service was closed for about two years.

This time the texting service was turned off after it was reported on Wednesday that four students had been caught cheating after sending each other messages.

If the shutdowns are linked to exams, things should return to normal on Wednesday – as the last exams are being held on Tuesday

But the fact that there are no exams held on weekends has left people questioning why the text service has remained off.

Over the past week, the internet has occasionally returned at night and has been available in Addis Ababa since Friday evening, but it has not been switched back on in many other towns.

How have people been affected?

Besides the every day inconvenience and frustration, it is having a bad affect on business. According to Netblocks, an organisation which monitors freedom of access to the internet, a one-day shutdown of the internet costs Ethiopia at least $4.5m (£3.6m). 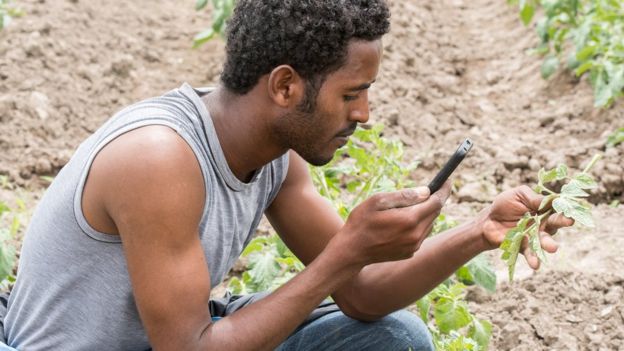 This is important because on Thursday Ethiopia’s parliament approved a law to open up the telecommunications sector, allowing foreign operators access Africa’s second-most populous country.

The country expects to issue the first licences to multi-national mobile companies by the end of the year, bringing an end to a state monopoly in one of the world’s last, large telecommunications markets.

Control of information by the Ethiopian government has long been a contentious issue, so the opening up of the market will have ramifications on the economy and politics. At the moment Ethio Telecom provides voice, SMS and data services to more than 41 million customers – so there is scope to reach many more in a population of more than 100 million.

“Liberalisation of the telecom sector will be a game changer, not only for the telecom sector, but also for the general public and the broader economy,” says Zemedeneh Negatu, an Ethiopian-born investor and chairman of US-based investment firm Fairfax Africa Fund.

This includes technology, education, manufacturing and banking. “All these sectors will benefit from a very efficient, competitive, cost effective, world-class telecom ecosystem,” he says.

Ironically, news of the telecoms law being passed took a day to come out because of the internet outages. But the establishment of an independent regulator, as detailed in the new law, may be the key towards providing checks and balances to investing telecom firms and government authorities alike.

Multi-nationals, including Safaricom, MTN Group, Orange and Vodafone, have all shown interest in bidding for licences.

Regional Integration for Peace and Development in the Horn of Africa