After days of sideways movement, the collective market stepped up, surging over $180 billion yet again as Bitcoin [BTC] pushed above the $5,350 resistance. Several coins were ushered into the green, with a standout rise exhibited at the end of the top-10 list by Cardano [ADA].

Riding on the coattails of the king coin, Cardano’s price fell due to the BTC bears. However, the altcoin had its own isolated news resulting in a surge, coming from the East African country of Ethiopia.

Charles Hoskinson, the CEO of IOHK, the company behind the cryptocurrency told the community via an AMA session on April 21 that a Memorandum of Understanding [MoU] has been signed with the Ethiopian government. Based on the MoU, a digital payments system will be set up in partnership with the country’s Ministry of Innovation and Technology.

The cryptocurrency will be used firstly by the residents in the capital city of Addis Ababa, prior to expanding to other cities in the country. ADA will primarily be implemented for utility payments and public transportation.

Working in coalition with the government for a financial project of this magnitude will provide a significant test case for the cryptocurrency and will further adoption on a larger, sovereign level. In reference to the same, Hoskinson said:

“It’s not just a made-up thing; an aspirational which we hope will acquire customers. It’s a government-sponsored monopoly in that respect.” 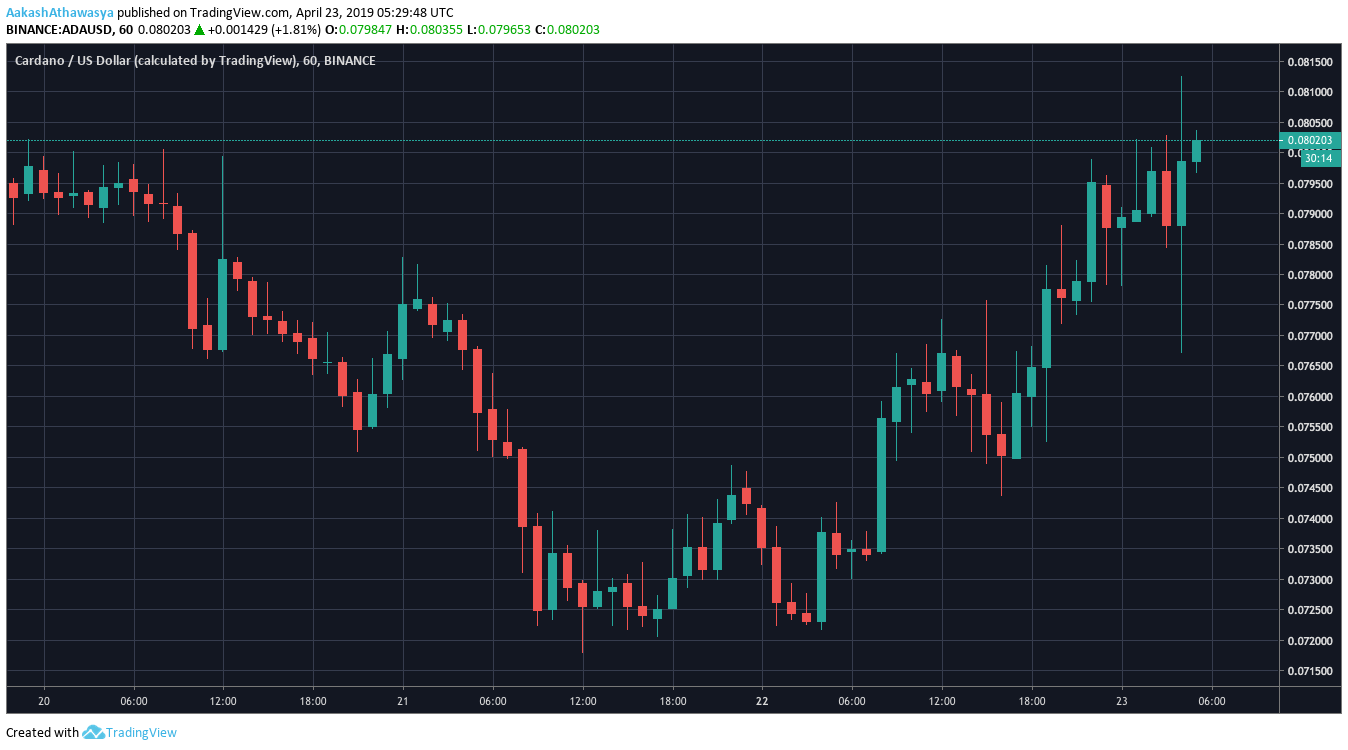 Cardano was buoyed by Bitcoin [BTC] breaking the $5,500 mark, exhibiting mildly bullish movements on 22 April. Despite the market trading sideways, indicators did point to a bearish escape as no notable decline was present.

The prominent price push for the cryptocurrency began at 0800 UTC when ADA was trading at $0.0722 and saw an 8.17 percent increase to $0.0781 within a period of three hours. For Cardano, the next rise occurred at 1200 UTC when it rose from the aforementioned point to its current price of $0.0797. It should be noted that the coin did not enjoy one streamlined move up as the surge was marred by marginal dips, but the bulls managed to sustain.

Since the rise, Cardano has seen a whopping 9.17 percent increase against the US dollar in a 24-hour period, while competitor coins are seeing only minimal gains. In terms of market cap, Cardano saw a $200 million rise, breaking the $2 billion mark in the process. However, prior to last week’s market correction and sideways movement, Cardano’s market cap was $2.18 billion.

ZBG accounts for the highest ADA trade volume, holding 32 percent of the total trade volume in the trading pair ADA/USDT. Other prominent exchanges on the list are Binance, Upbit, Huobi Global and HitBTC.