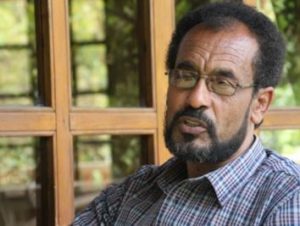 In my life time, I have opposed injustice, discrimination, ethnic favoritism, and oppression. I am honored to learn that my non-violent struggles and humble sacrifices for the democratic and human rights of the Oromo people, to whom I was born without a wish on my part […], have been considered a crime and to be unjustly convicted. If apology was warranted, I would seek it not from the court that found me guilty of a crime I did not commit but rather from my people […] for failing to fully speak to the depth of their suffering in the interest of the co-existence of peoples…

Bekele is anything but a “radical” or “terrorist” of any sort.
Calling Bekele Gerba a “terrorist” is as true as calling the T-TPLF “democratic”.
If the T-TPLF is democratic, then Bekele is a “terrorist”.
What is extraordinary is the fact that Bekele is not even a harsh critic of the T-TPLF as are many others.
Bekele’s views are expressed in balanced, reasoned, well-considered and factually accurate way. He is not the provocative and relentless pamphleteer who rages against the T-TPLF tyrannical machine.
Bekele does not have an axe to grind. He just tells the truth as it is, unvarnished and raw!
Here is Bekele Gerba in his own words from a speech he made on the land grab in Ethiopia in 2010.
I ask my readers to judge if the man speaking in the video (translation below) is anything other than a thoughtful, deliberate, brilliant, knowledgeable, perceptive, discerning and profoundly compassionate human being. (To view the video, click HERE; translation below.)
In 2010, Bekele showed the T-TPLF and world the kind of man he is:

To read an extraordinarily  revealing and riveting interview of Bekele Gerba (May 2015) on Addis Standard, click HERE.
As I read statements and comments online about Bekele Gerba and the others facing trumped up charges of  terrorism, I shake my head. Those who talk about T-TPLF political kourts as courts are legitimizing the very idea that the T-TPLF operates a court system. We should call a spade, a spade. The T-TPLF does not operate a “court” system; it operates a monkey kourt system.
The T-TPLF has long embarked on a mission of legal lynching of its opponents and critics. The T-TPLF pretrial process is perverted. The presumption of innocence (Eth. Const. Art. 20(3)) is openly flouted. The late T-TPLF leader Meles Zenawi in 2011 made a public statement in Norway and proclaimed the guilt of freelance Swedish journalists Johan Persson and Martin Schibbye as they were on trial on charges of “terrorism”. Meles emphatically declared the duo “are, at the very least, messenger boys of a terrorist organization. They are not journalists.” Persson and Schibbye were “convicted” and sentenced to long prison terms.
In August 2005, Congressman Christopher Smith (R-NJ) met with the late Meles Zenawi. On October 22, 2007, Smith (R-NJ) summarized  his conversation with Meles Zenawi at that time:

…I also had a lengthy meeting with Prime Minister Meles Zenawi. I urged him to investigate the slaughter of the pro-democracy demonstrators, to punish those responsible, and to release all political prisoners…
Finally, when I asked the Prime Minister to work with the opposition and show respect and tolerance for those with differing views on the challenges facing Ethiopia he said, “I have a file on all of them; they are all guilty of treason.”
I was struck by his all-knowing tone. Guilty! They’re all guilty simply because Meles says so? No trial? Not even a Kangaroo court?…
I urged Prime Minister Meles not to take that route. (Emphasis added.)

Travesty of justice and the injustice of illiterates 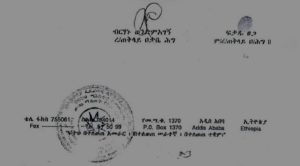 In the image above, extracted from the charging document  alleging the commission of terrorism by Bekele Gerba and the 21 co-defendants, the assistant T-TPLF federal prosecutor Fekadu Tsega has affixed his thumbprint as his legal signature on the charging document.
Yes, thumbprint!
In Ethiopia and most of Africa, ONLY persons who can neither read nor write use their thumbprints as their signatures.
Only in T-TPLF’s Ethiopia is an illiterate “federal” prosecutor allowed to charge citizens with crimes against the state.
How can a prosecutor sign charges that he cannot read?
In as much as I despise the criminal military Derg regime, I will give it credit for compulsory literacy program (Meserete Timhirt [basic literacy]) throughout the country guaranteeing at a minimum that every citizen is able to sign his/her name in Amharic script and never use thumbprints for signatures.
Today, illiterate T-TPLF “federal” prosecutors sign the criminal charges they file with thumbprints.
Only in a monkey kourt would criminal charges verified by an illiterate prosecutor be accepted as legitimate.
Only in a monkey kourt would bail be opposed by an illiterate prosecutor.
But there you have it in black and white (I mean in thumbprint).
But we should not be surprised. Many of the functionally illiterate T-TPLF leaders fare no better. There are amply documented cases in which top T-TPLF leaders have purchased fake degrees from online diploma mills to prove they are “educated”.
In May 2015, Bekele Gerba said:

There is a challenge. But I think there is still hope. I always believe that things can change gradually. Because of the culture we were in for hundreds, or may be thousands of years, we used to think changing a government is only possible by violence, or armed struggle. But I think that time has passed now; it is possible to change regimes and to confront governments by peaceful means of struggle. If people are very much committed to peaceful struggle, I think the situation will change and the government must exploit this situation – meaning that, as an opposition, we are very helpful, we can contribute much.