Jerusalem (CNN)An off-duty police officer was in a playground with his family when he saw two men fighting, according to police accounts, which have been challenged by eye-witnesses. When the officer identified himself, police said the men threw stones at him. Fearing for his life, the officer pulled the trigger, police said. The bullet hit a 19-year-old black man, who later died in hospital.

Worka (R), the father of Solomon Teka, mourns over his body during his funeral.
Anger in the teenager’s community erupted after the shooting. In the following two days, protesters torched cars, damaged ambulances and burned tires as the violence spread across the country.
As the investigation began into the circumstances of the shooting, the officer was taken into custody and subsequently released and placed under house arrest. But it was too late to prevent the rioting in which dozens were injured on both sides, and 136 protesters were taken into custody, according to police.
It’s the type of violence sparked by perceived racial injustice that we’ve often seen in cities in the United States.
But this happened in Israel, and the black man who died, Solomon Teka, was Jewish. 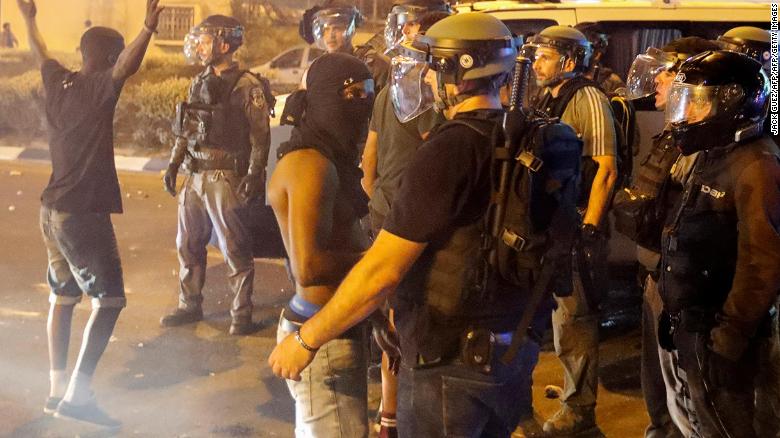 Members of the Ethiopian community of Israel face policemen during clashes in the Israeli coastal city of Netanya on July 2, 2019.

For years, Ethiopian-Israelis have complained of being treated like second-class citizens — black Jews in a white country — unfairly targeted by police and facing systemic discrimination. The death of Teka, who moved to Israel from Ethiopia with his family when he was 12, has brought these perceived injustices boiling to the surface.
Most of Israel’s Ethiopian community arrived in two larges waves of migration in the 1980s and 1990s, following Israel’s recognition of Ethiopia’s Jewish community in 1975. For generations, their ancestors had lived in the east African country, but as the political situation deteriorated in the region, Israeli leaders felt a need to bring the Jewish community out. 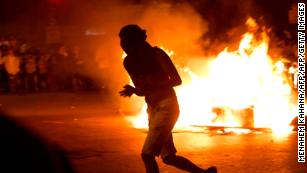 Violent protests over teen’s death in Israel injure 111 police
First in 1984, as part of Operation Moses, then again in 1991 as Operation Solomon, Ethiopian Jews were flown to Israel in large numbers. In one 36-hour period in May 1991, more than 14,000 Ethiopians were brought to Israel on board military and civilian aircraft.
Today, Israel’s Ethiopian community numbers approximately 140,000, according to the Population and Census Bureau, which is about 1.5% of the population.
But the Ethiopian-Israeli community lags behind the general population in nearly every socioeconomic category, according to the Ethiopian National Project, an advocacy organization working to advance integration of Ethiopians into Israeli society. The Ethiopian community has a higher poverty rate, lower employment rate, and lower average income than the general population of Israel. 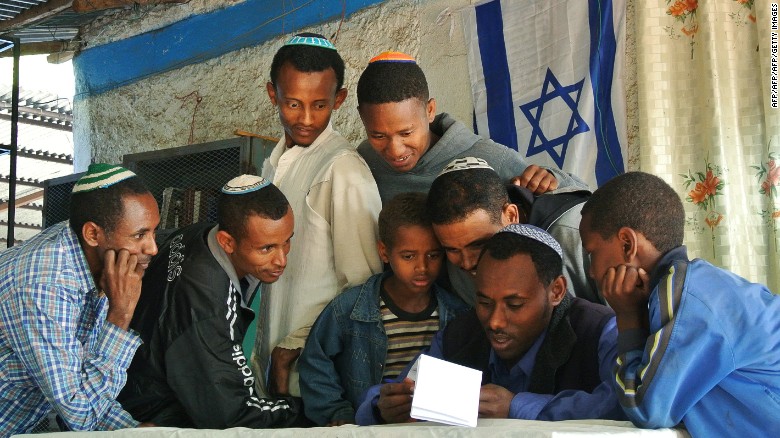 Ethiopian Jews gather at a makeshift synagogue in Gondar, Ethiopia, to see if they have been given a date to move to Israel on November 19, 2012.
But the tension goes beyond economics. Up until the mid-90s, Israeli blood banks threw out blood donated by Ethiopians because of a fear of AIDS contamination. In 2014, Ethiopian-Israeli Avera Mengistu crossed into Gaza, where it’s widely believed he has been held prisoner ever since. Though government officials routinely talk of two Israeli soldiers whose remains are still in Gaza following the 2014 war, Mengistu’s name comes up far less frequently in public discourse.
And in 2015, Damas Pakada was stopped and beaten by police a block from his home near Tel Aviv. Pakada was even in his military uniform, considered a respected badge of honor in Israel, but he was still harassed. The viral video of the beating sparked its own protests. 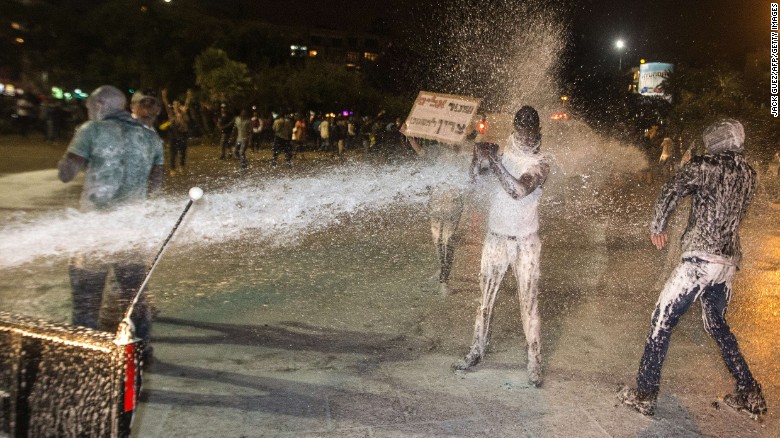 Protests in 2015 were met with water cannons.
For the Ethiopian-Israeli community, examples like this, where they feel marginalized or discriminated against, occur far more often than they should.
“There isn’t a single Israeli of Ethiopian descent who hasn’t experienced racism in Israel because of the color of their skin. Almost every young Ethiopian man has been subjected to heavy-handed treatment or, at the very least, has been verbally abused by a policeman in the street,” wrote Danny Adena Abebe, an Ethiopian-Israeli journalist, in an article for the Yedioth Ahronoth newspaper on Tuesday.
“The second generation of Ethiopians was born and grew up into a grim reality in which their blood could be spilled with impunity. The relations between the police and the youth in our community are relations of suspicion. The very same police that are supposed to protect us as citizens also inspire fear and terror in us.”
Tebeka, an organization which advocates on behalf of the Ethiopian community in Israel, wrote a letter to Prime Minister Benjamin Netanyahu and Public Security Minister Gilad Erdan, calling on them to immediately fire the police officer involved in Teka’s death.
“Tebeka has warned and warns again that the hand of police officers is very light on the trigger and, beyond the immediate sanction that is required, there is a need to have a fundamental house-cleaning of the Israeli police and to operate with a firm hand against policemen that have transgressed,” the organization wrote in the letter. In the past, they have also called to equip police with body cameras to document any suspected cases of racial discrimination.

Israeli officials have so far taken a conciliatory tone with the protesters. Minister of Public Security Gilad Erdan called the shooting death of Teka a “serious and painful incident” that “should not have happened.”
For hours, as protests spread across Israel Tuesday night, police gave them a wide berth, allowing them to block off major streets in cities across the country. But Erdan said police could not tolerate the violence that followed.
“Violence and anarchy must not be,” Erdan told a meeting of Ethiopian community leaders on Tuesday. He vowed to open a body within the police to monitor allegations of racism and discrimination against police.
“I do not think that the police are perfect or that someone is not responsible,” Erdan said. “We all have a responsibility for human life and a responsibility to try and work to reduce the chances that young people and youths will be hurt.”
His message of reconciliation was echoed by President Reuven Rivlin, who called for protesters to wait for the results of the investigation into the shooting.
“This is not a civil war. It is a shared struggle of brothers and sisters for their shared home and their shared future. I ask all of us to act responsibly and with moderation. My home is your home. Let us continue to stand together like a wall against violence, any form of violence, and to fight together for our shared home.”
Israel’s Ethiopian community says it wants to see sentiments like those become their daily reality.
572
SHARES
FacebookTwitter