ALEXANDRIA, Va. – A former Somali army colonel accused of war crimes was found guilty of torture Tuesday in Virginia, where he’s lived for decades and, up until earlier this month, worked as a driver for both Uber and Lyft.

A federal civil jury ordered Yusuf Abdi Ali, of Fairfax, to pay $500,000 to Farhan Mohamoud Tani Warfaa, who said he was tortured for four months as a teen in 1987 before being shot multiple times and left for dead. The jury unanimously found Ali guilty and awarded Warfaa, now 49, $400,000 in compensatory damages and $100,000 in punitive damages, federal court records show.

“We’re thrilled that the jury came back and found that our client had in fact been tortured,” Warfaa’s attorney, Kathy Roberts, of the Center for Justice and Accountability, or CJA, told The Washington Post. “It’s a good verdict; it stands for the principle that no one above the law. Our client is very happy.”

Warfaa, who traveled for the trial from his home in northern Somalia, also now known as Somaliland, said in a statement through the CJA that he hopes Tuesday’s verdict can contribute to the continued healing of those who suffered at the hands of Ali, who was purportedly a high-ranking commander in former Somali President Jaalle Mohamed Siad Barre’s regime.

Ali was known as Col. “Tukeh,” or “Crow,” during his time in Siad Barre’s command, the Post reported.

“It has been a long journey, seeking justice for what happened to me and to my community,” Warfaa said in the statement. “Today’s verdict was a vindication not only for me, but also for many others in Somaliland who suffered under Col. Tukeh’s command.”

The torture Warfaa was subjected to as a 17-year-old farmer stemmed from a missing water tanker.

“Over the course of a three-day trial, the jury heard evidence that early one morning in 1987, Mr. Warfaa was rounded up with other men from his village and taken to the military headquarters of the Fifth Brigade of the Somali National Army, where Col. Tukeh held command,” CJA attorneys said in a news release. “Mr. Warfaa testified that Col. Tukeh’s soldiers tortured and interrogated him, and that Col. Tukeh himself shot Mr. Warfaa multiple times at point blank range, leaving him for dead.

Warfaa said in his lawsuit that he survived only because the men Ali assigned as his gravediggers saw he was alive and solicited a bribe from his family to let him live.

Ali’s attorney, Joseph Peter Drennan, told reporters the jury’s split decision suggested his client was found guilty of torture simply because of his position in the Somali army.

“Yusuf Abdi Ali was held liable because he was a commander in an army that served under a regime that had a poor human rights record,” Drennan said, according to CNN. “But aside from the plaintiff’s testimony, there was virtually no evidence that Ali tortured anyone.”

Drennan argued that his client cannot afford to pay the damages ordered by the jury, pointing out that Ali recently lost his job as a ride-share driver.

Watch CNN’s report below on Yusuf Abdi Ali, who drove for Uber even as his federal civil case began last week.

It was CNN that sent undercover reporters earlier this month to find Ali, who was working full-time as an Uber driver even as his civil trial for Warfaa’s torture and shooting was set to begin. At the time the reporters caught a ride with Ali, he was listed as an “Uber Pro Diamond” driver who had been working for the company for 18 months.

“I do this full-time,” Ali, who worked in suburban Virginia, told the reporters, saying he preferred working weekends because “that’s where the money is.”

During the car ride, which the reporters surreptitiously caught on video, Ali said applying for the job had been easy.

“They just want your background check, that’s it,” Ali said. “If you apply tonight, maybe after two days, it will come, you know, everything.” 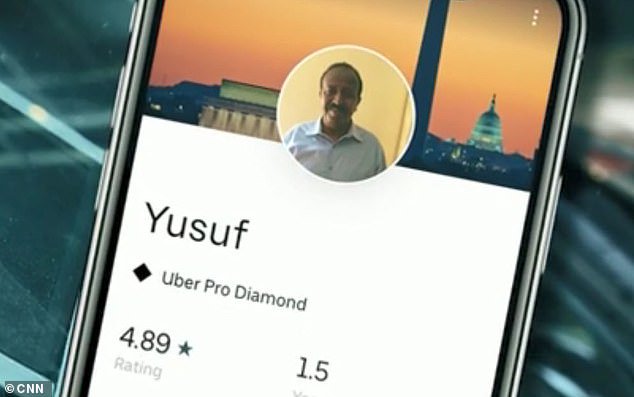 Ali passed the background check despite his name turning up in documents and news accounts of his alleged war crimes that are easily found in a Google search, CNN reported. The alleged atrocities under his command have also been detailed in a documentary by the Canadian Broadcasting Corp.

Witnesses who participated in the CBC documentary recounted murders they allege Ali committed during his command.

During the civil trial in the federal courtroom in Alexandria, former soldiers who served under Ali and witnesses in Warfaa’s village testified on the plaintiff’s behalf.

Ali has denied the claims against him, the Post reported.

Watch the entire 1992 CBC documentary about Ali, Crimes Against Humanity, below.

“I did nothing to anybody,” he said in a deposition, according to the newspaper. “They’re just lying.”

CNN reported that, following its questions about Ali, Uber suspended his access to the app. Lyft, which he had stopped working for in September, permanently banned him from working for the company.

The news network said that background checks for both Uber and Lyft are mainly done by a third party company called Checkr, which checks for red flags in sex offender databases, federal and local court records, as well as databases used to flag suspected terrorists.

A Checkr spokesperson told CNN its background checks “rely on public criminal records that have been adjudicated in a court of law rather than unverified sources like Google search results.”

“Similarly, most employers don’t request background checks that include pending civil litigation due to its subjective nature,” the spokesperson said.

The lawsuit against Ali was first filed in 2005, when Warfaa learned the former military commander was living in the area of Alexandria, Virginia. According to the complaint, Ali served as commander of the Somali army’s Fifth Brigade from 1984 to 1989 before seeking asylum in Canada in 1990, as the tide turned against dictator Siad Barre.

Siad Barre was overthrown in 1991, plunging the country into decades of civil war.

“Col. Tukeh fled to Canada after the Barre regime was overthrown and eventually became a permanent resident of the United States, where he has been living since 1996,” the CJA said in its background of the case.

Warfaa’s civil suit says Ali was deported from Canada in 1992 for “having committed gross human rights abuses in Somalia,” at which time he came to the U.S. When deportation proceedings were initiated against him here, he voluntarily left the country.

He returned in 1996, reportedly on a visa obtained through his Somali wife, who had become a U.S. citizen, CNN reported. Ali’s wife was found guilty in 2006 of naturalization fraud for claiming she was a refugee from the country’s Isaaq clan — the same clan that Ali has been accused of brutalizing during the civil war.

Warfaa’s lawsuit claims he was targeted because he is a member of the Isaaq clan, members of which established an opposition force called the Somali National Movement during the war.

“The Somali National Army committed widespread human rights abuses in its violent campaign to eliminate the SNM and any perceived supporters,” the civil complaint states. “It killed and looted livestock, blew up water reservoirs, burned homes, and tortured and detained alleged SNM supporters.”

Read the entire amended complaint against Yusuf Abdi Ali below. Warning: The details of the alleged acts against Farhan Warfaa may be disturbing to some readers.

The court document states that when the water tanker, which had been used to provide water to Ethiopian refugees, was stolen, Ali went to Warfaa’s village, Jifo Uray, with his men and threatened to execute everyone there unless the tanker was returned.

It was a few nights later that Warfaa and others from the village were rounded up and imprisoned by Ali’s men, the lawsuit states.

CNN’s report earlier this month was not the first time the network tracked Ali down in the United States. Reporters found him in 2016 working as a security guard at Dulles International Airport near Washington, D.C.

He was fired from that job a short time after the story aired, the network said.