Oromo clerics are rallying for their own regional administrative unit

On September 1, 2019, an ad hoc committee formed by Oromo clerics from the Ethiopian Orthodox Tewahedo Church (EOTC), declared their plan to establish a new regional parish administration unit in Oromia Regional State. They want to establish a regional “episcopacy” — in church speak — that caters to the spiritual, administrative and linguistic needs of the Orthodox Oromo people.

The EOTC currently has over 50 million members comprised of members from all over Ethiopia.

Oromo church members say that inefficiency and corruption hinders EOTC from addressing their spiritual, linguistic and administrative needs and members of the ad hoc committee threatened to take measures into their own hands — including the launch of a distinct, separate administrative unit — if they don’t hear back within 30 days from EOTC’s ruling body, known as the Holy Synod and Church fathers.

The EOTC has its own unique administrative structure that does not match Ethiopia’s federal government structure, which constitutes nine autonomous ethnic regions — among which Oromia is the largest. The Oromo clerics want to reorganize the church’s structure to follow Ethiopia’s federal political system.

The EOTC has about 35,0000 churches throughout Ethiopia. Some reports suggest about 7,000 are in Oromia. This constitutes about 20 percent of all churches.

The clerics believe that reorganizing the church’s administrative structure will help revitalize empty and neglected churches whose followers left them for expanding Protestant churches in Oromia.

According to the head of the ad hoc committee, arch-scholar Belay Mekonen, there is already a precedent for doing this. He says that the church has changed its governance structures throughout history to match changes in government structures.

He also insisted that new administrative unit will help the EOTC realize its apostolic mission by bringing the church closer to Oromia people, with plans to consolidate and institutionalize the use of Afan Oromo (the Oromo language) within the EOTC.

Unlike Protestant churches that offer services Afan Oromo, Oromo clerics say the EOTC expects Oromos to worship in Ge’ez, the church’s liturgical language, or Amharic, the working language of Ethiopia’s federal government. But Ge’ez is an ancient language that most people barely understand — not only in Oromia but throughout Ethiopia. And Amharic is a language spoken mainly by people who reside in major cities and towns in Oromia, and less so in rural areas, where Afan Oromo is prevalent.

Another member of the ad hoc committee said the new administrative unit will help to bring the people who felt alienated back to church. 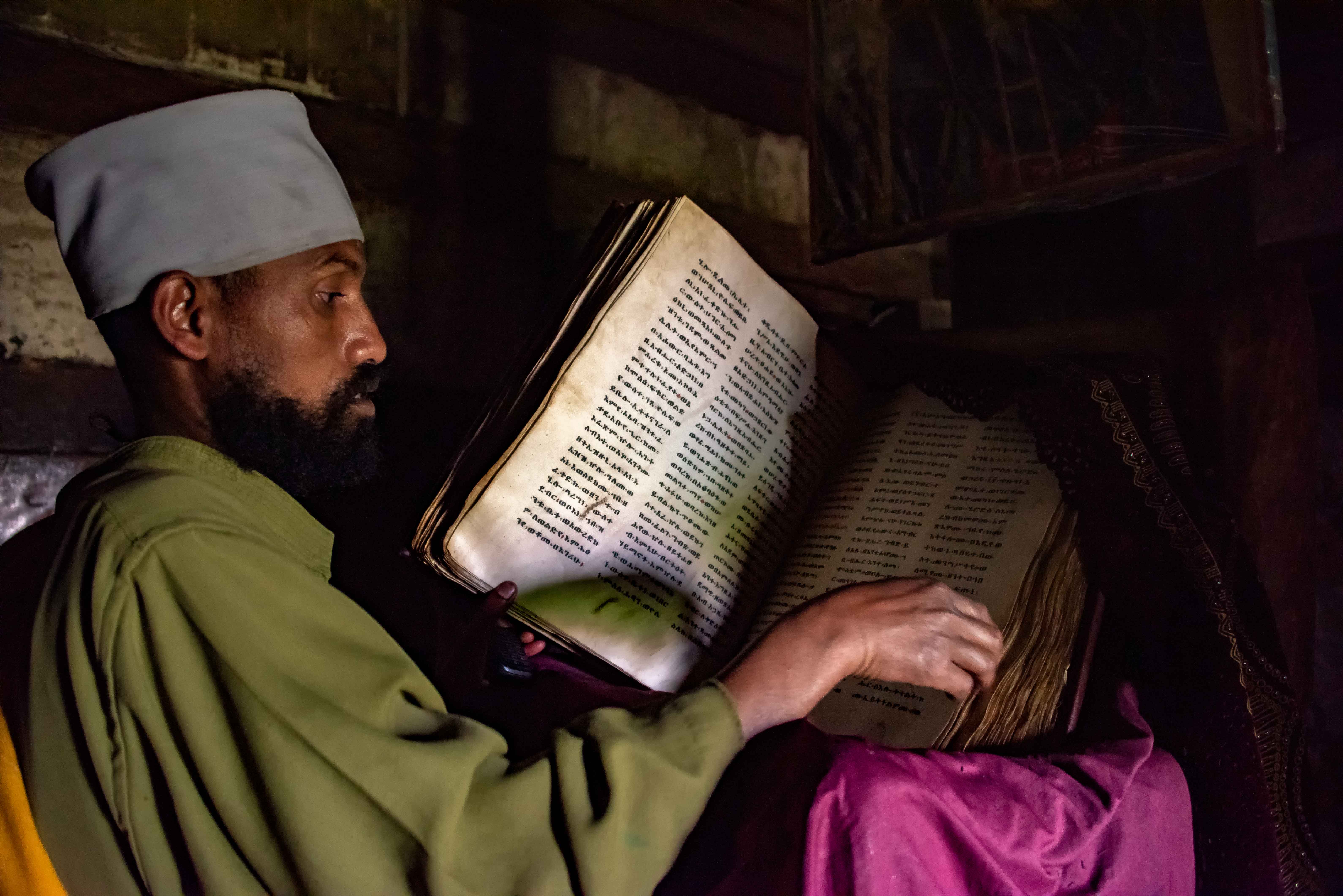 A monk reads Ge’ez, the liturgical language of the Ethiopia Orthodox Tewahedo Church, October 15, 2018. Photo by Rod Waddington via Flickr, CC BY 2.0.

The committee’s push prompted a stinging rebuke from the Holy Synod, setting up a protracted intra-institutional administrative conflict.

Opposition to the committee has also come from Orthodox faithfuls, who feel the push to establish a separate administrative unit is profoundly disturbing. They say their church is a sacred institution only willed by God.

Others variously labeled the move as an opportunistic shot or attempt to destroy the defining element of their national, cultural and religious identity:

This why I think these new rebels aren’t EOC institutionalists who seek greater inclusiveness. They are cultural vandals who have suddenly got the opportunity to economically and politically profit from the chaos and crisis in one of humanity’s greatest institutions. https://twitter.com/sitinanu/status/1168208368214917120 …

86 people are talking about this

I don’t think I will ever identify with any specific religion anymore but I have a soft spot for EOTC [ which I used to taunt in my college days when I was “ woke” ]
It’s historic and was nurtured and protected by our forefathers. I am proud of EOTC and its wisdom. https://twitter.com/abiyetk/status/1168316302559252480 …

I left the EOC as a religion skeptic when I was a 16-year-old law student. Since then I had been to mass a few times just to please my family. But the recent vandalistic attack on this august institution is making me re-embrace my identity as a Tewahedo Orthodox Christian.

Numerous Addis Ababa-based EOTC organizations and parish administrators have scheduled to hold a rally on Sunday, September 15, 2019, protesting an escalation of violence against Orthodox clerics, laity and the destruction of churches.

Rally organizers said the demonstration is planned to demand the government to provide protection for Orthodox Christians throughout Ethiopia. They emphasized the planned rally has nothing to do with the Oromo clerics and could be called off if they get a practical response.

But the planned rally takes on added significance because the organizers say they support the response the Holy Synod has given to Oromo clerics.

In a lengthy blog post, he wrote that while he agrees with the clerics’ analysis of the problem in the EOTC, he also wrote the clerics’ solution is wrong.

But members of the ad hoc committee insist that they do not want to splinter the EOTC in Oromia. They have not proposed a distinct theological element nor introduced a new canon and ritual activities, they say.

On social media, the clerics’ move has amplified increasing ethnic tensions, due to a long-standing rift between Amhara and Oromo people, two of Ethiopia’s largest ethnic groups: Conflicts over land, history, economy and culture have intensified, nearly a year after their ruling elites entered a tactical alliance within the Ethiopian Peoples’ Revolutionary Party (the EPRDF), to bring down the supremacy of Tigryan elites who ruled for 27 years.

Both Amharas and Oromos practice a wide range of religions. Christianity and Islam are the main ones.

Statistically, 30.4% of 25 million Oromos follow the EOTC, while 82.5% of 19 million Amharas are Orthodox faithfuls.

The Amharas have a tangled relationship with the EOTC. A prominent historian Harold Marcus describes the Amharas alongside the Tigrayans as inheritors and avatars of Orthodox Christianity.

This contrasts sharply with the Oromos’ relationship with EOTC. Although there is a significant number of Orthodox Oromos, some argue Oromo nationalists have tended to promote the development of secular nationalism as a unifying ideology.

In fact, a long-held belief among Oromo nationalists asserts that when Oromos and other southern peoples of Ethiopia incorporated into modern Ethiopia, the EOTC was an active agent for assimilationist policies of successive Ethiopian emperors.

They contend that most of bishops and priests historically appointed to Oromia were native Amharic speakers who aimed to “Amharize” Oromos by discouraging the use of Afan Oromo in church.

The latest dispute between Oromo clerics and the Holy Synod is a new incarnation of a long-standing strand of EOTC’s intra-institutional conflict — albeit with different features and players.

In 1991, after the Tigray People’s Liberation Front (TPLF) troops assumed control of the country, a prolonged intra-institutional conflict broke out within the EOTC, when the TPLF-led regime plotted to force the abdication of the fourth Patriarch, Abune Merkorios.

Following the abdication of the Patriarch, a movement supported by members of the Ethiopian diaspora in the US formed a Holy Synod in Exile in 1996.

This resulted in division among clergy and faithful that stemmed from ethnic and political tension between the Amhara and Tigray.

The EOTC in exile also operated as an anti-EPRDF body based in Washington, DC.

Regardless of one’s ethnic background and recurring intra-institutional conflict, most Orthodox followers consider the church a defining element of Ethiopian national identity. Even people who describe their affiliation to the church as cultural rather than faith-based feel a connection.

But Ethiopians who live in regions dominated by non-Orthodox faiths emphasize that their identity is not predicated on Orthodox religiosity.